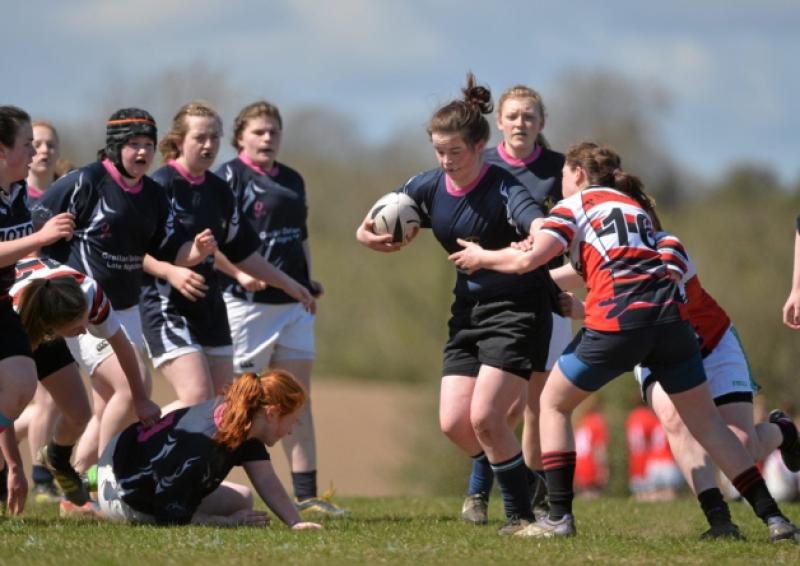 Over 160 U-18 girls from all over Leinster recently came together at Wicklow Rugby club for an end of season blitz.

Over 160 U-18 girls from all over Leinster recently came together at Wicklow Rugby club for an end of season blitz.

Portlaoise were one of the outstanding sides in the tournament and went all the way to the final where they were unlucky to lose to the host side.

After a nervous start against the combined team of New Ross and Eniscorthy, Geena Behan crossed the line following rock solid forward play from Portlaoise. Eimear Corri scored just before half time to settle the nerves. Portlaoise continued to apply pressure and a move initiated by Sarah Culliton involving quick handling by Laura McWey, Tara Buggie, Lauren McDonald and Katie Irwin lead to a match winning try from Corri. New Ross/Eniscorthy gained a compensation try in the final minutes but Portlaoise prevailed 15-5.

An emboldened Portlaoise then tackled the combination of Longford and Clane. Áine Camphuijsen, Faye Nolan, Aoife McCormack combined with Mairéad Keogh to provide good ball to the backs. Tara Buggie, Anna O’Neill and Niamh O’Riordan combined well and featured in Corri’s two tries. Longford and Clane had no answer to Portlaoise’s defense as the Laois side won 10-0.

The stage was set for a third round decider with Naas/Cill Dara. Portlaoise’s forwards took control of the game from the outset. Robyn and Abigail Mullen along with Clodagh and Geena Behan dominated the opposition and the try came from Rebecca Mullen after a push over. Portlaoise stuck to this plan and were rewarded with try from Eimear Lynam to seal the outcome and a 10-0 win.

Portlaoise faced Gorey in the semi-final and Abigail Mullen put her mark on the tournament with a brave charge that drove the defenders over the line and allowed her to touch down. Laura McWey, Anna O’Neill, Áine Camphuijsen featured and contributed to Eimear Corri’s try that proved to be a clincher for their third succesive 10-0 win.

The final against Wicklow was an entertaining cliff-hanger to neutral observers but was a nail-biting experience for the partisans. Each side thoroughly deserved their place and were well matched. In the end, a breakaway from deep in Wicklow’s territory allowed their speedy winger to race to the corner, side-step the final tackle and score the winning try just before the final whistle. Portlaoise, although disappointed were delighted with their performance and look forward to next season with expectation.