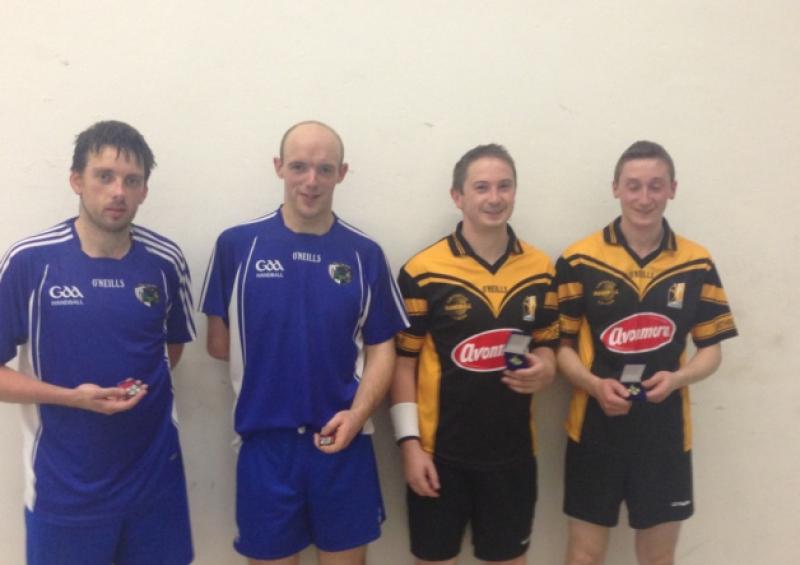 Last Monday night in Garryhill, Laois handballers Andrew Dowling and Peter Whelan were looking to add the Leinster 60x30 Junior B title to the 40x20 title they had won earlier in the year.

Last Monday night in Garryhill, Laois handballers Andrew Dowling and Peter Whelan were looking to add the Leinster 60x30 Junior B title to the 40x20 title they had won earlier in the year.

In the final they faced strong opposition in the shape of Brendan and Diarmuid Burke of Kilkenny who had defeated Tómas Lennon and Ray Fogarty of Laois in their semi-final.

The Kilkenny pairing made a strong start to the opening game building up a 13-4 lead. The two Laois players were playing nervy handball and made a number of uncharacteristic errors that didn’t help their cause. Dowling and Whelan did up their performance as they game progressed, but were unable to reel back the sizeable deficit. They eventually lost the first game by 21-11.

The second game was to be a more competitive affair with the Laois handballers now playing a much better brand of handball. Every ace was hard fought and there was little to differentiate between the two pairing at the beginning of the second game.

The turning point in the match came with the score standing at 13-11 to the Kilkenny handballers. In an incredible rally with a number of quality returns and high-skilled handball, it was the Laois pairing who were to eventually lose out after Brendan Burke played a fantastic passing shot. Losing this rally seemed to take the momentum from the Laois challenge and they failed to score another ace for the remainder of the game. This allowed the Burke brothers to deservingly capture the 60x30 Leinster title on a scoreline of 21-11 21-11.

However, the achievements of Laois handballers in this year’s 60x30 Leinster championships must be noted. As well as Whelan and Dowling qualifying for the Junior B final, Ciara Dowling reached the Ladies Junior B singles final and partnered Niamh Dunne to also reach the Ladies doubles final. This progress is all the more remarkable when you consider that our players have to travel long distances to train as there are no 60x30 handball alleys in the county.