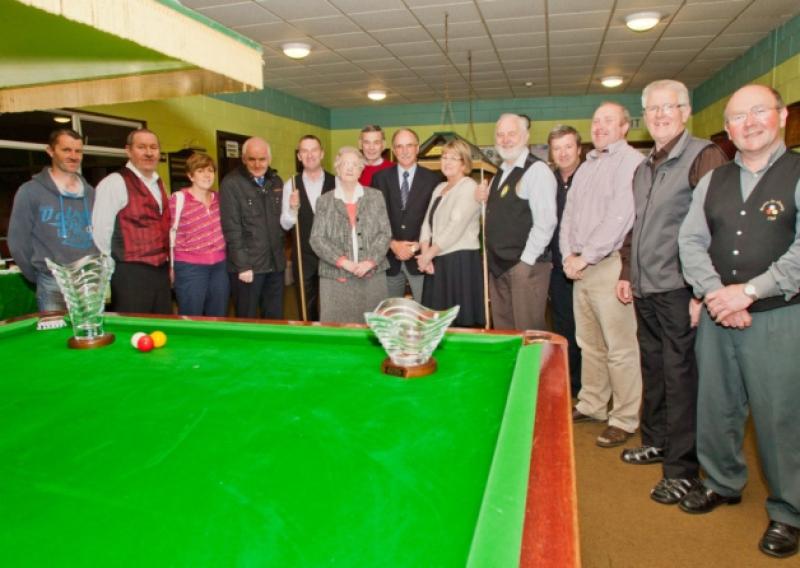 The 14th annual Joseph Thompson Memorial billiards tournament came to a finish in the O’Brien memorial hall in Borris-in-Ossory on Sunday, May 19.

The 14th annual Joseph Thompson Memorial billiards tournament came to a finish in the O’Brien memorial hall in Borris-in-Ossory on Sunday, May 19.

Watched by a very good crowd, which included sponsors Frank and Margaret Thompson, the competition sponsors, Theresa Lalor, sister of the late Joseph Thompson as well as many club members.

The other semi-final saw Cork’s Timmy Murphy dictate matter thougout and he won by 550-438. Referee was Leo Kelleher and marker was Liam Byrne, with both semi-finals played in a very sporting manner.

At this stage all involved retreated to the Racket Hall in Roscrea for a meal, before play resumed with a thrilling final where both players showcased their class. Timmy Murphy set the pace to lead by 107-33, and then had had a 29 to move 180-117 in front. He followed up his good form with scores of 39 and 30 as the scores went to 311-183, as it looked like the title would be heading back down south with the Cork man.

Joe Doheny had other ideas, however, a good break of 57 saw him narrow the gap to 353-254 before adding breaks of 25 and 27 to see Murphy’s lead trimmed to 409-378. Joe again put the pressure on with a score of 24, but Timmy responded with a break of 85, the highest in the entire tournament.

That didn’t deter Joe, however, and he fought bravely to the end, but Timmy just about held on for a famous win on a scoreline of 600-544 and so claim the 2013 Joseph Thompson Memorial Billiards tournament, his first win in what was his first final appearance.

Club chairman Shane Kirwan congratulated Murphy on his success, while commiserating with Joe, Philip and Paul. He also thanks all the referees and markers, as well as Frank and Margaret Thompson, sponsors of the event. He also said that there were no losers in the tournament, as the game of billiards won throughout the three games.

The winners were presented with crystal trophies and prize money, while Timmy Murphy also won the prize money for biggest break. Murphy thanked all involved in his acceptance speech, and is looking forward to defending his title in 2014.