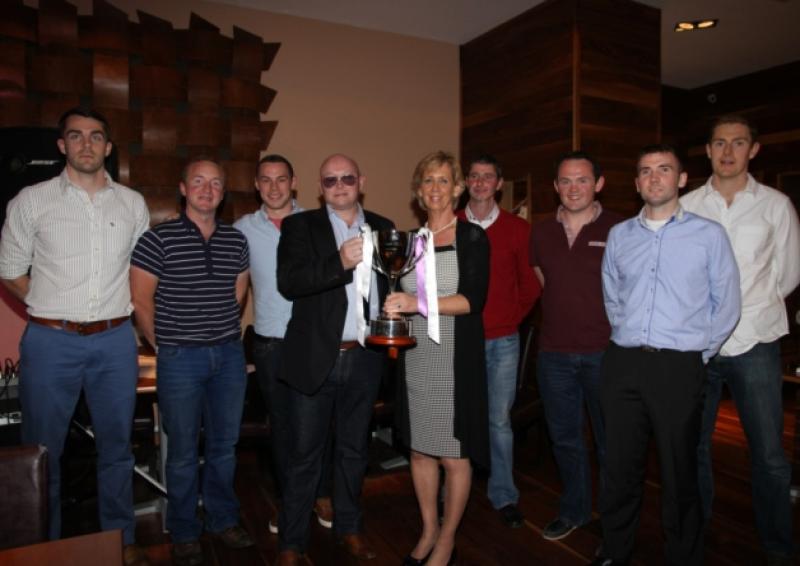 The Professor Hollywood Cup took place in O’Moore Park on May 5. The teams in this unique football match were managed by two legendary mangers, Brian Cody and Mick O’Dwyer.

The Professor Hollywood Cup took place in O’Moore Park on May 5. The teams in this unique football match were managed by two legendary mangers, Brian Cody and Mick O’Dwyer.

The teams, made up of men who themselves have received treatment for cancer, took to the football pitch in aid of the oncology units in St Luke’s and St James’s hospitals. It was a hard fought match that ended up in a draw with Cody’s team (St. Luke’s) scoring 1-15 and O’Dwyers team (St. James’s) scoring 3-9.

The Professor Hollywood Cup raised a total of €44,300 which is being divided equally between the cancer units in the two hospitals. The money will be spent on equipment and on patient services.

Richard Poole, who devised the idea of this unique match, presented the cheques to representatives from the hospitals at a presentation night last Saturday which was kindly sponsored by the Maldron Hotel.

On the night Richard stated, “I wish to sincerely thank all of our sponsors and everyone who helped out by donating services, money or their time to make this fundraiser a success. In particular the committee members for all of their hard work during the past year, I want to give a special mention to Ann Marie and Rachel Cooke, Timmy and Shane McEvoy, Thomas Dooley and Grainne Lambert who dedicate so much of their time to making this event happen.”

He continued, “I really appreciate the support received from the Laois County Board, Gerry Kavanagh and Niall Handy for allowing us the use of O’Moore Park. The match and the funds that we raised exceeded all of our expectations. On the day there was a great sense of camaraderie amongst the players. We had all been through our own journey with cancer and had a shared understanding. We were delighted to take the opportunity to show that it is possible to return to fitness and health after treatment. It felt very special to be there on the day playing in front of family and friends and it was truly an honour to line out on the pitch with such an amazing group of men.”

John McGrath (Wicklow), who was captain of the St James’s team, stated, “I was delighted to be involved with the Professor Hollywood Memorial Cup. I got to play under Mick O’Dwyer again, he was the manager of Wicklow when I was first diagnosed with leukaemia. I have made some great friends through this match and we all wanted to show people that you can beat cancer and get back to full health again. Everyone who played that day had their own battle with cancer and they have come through it to play GAA again.”