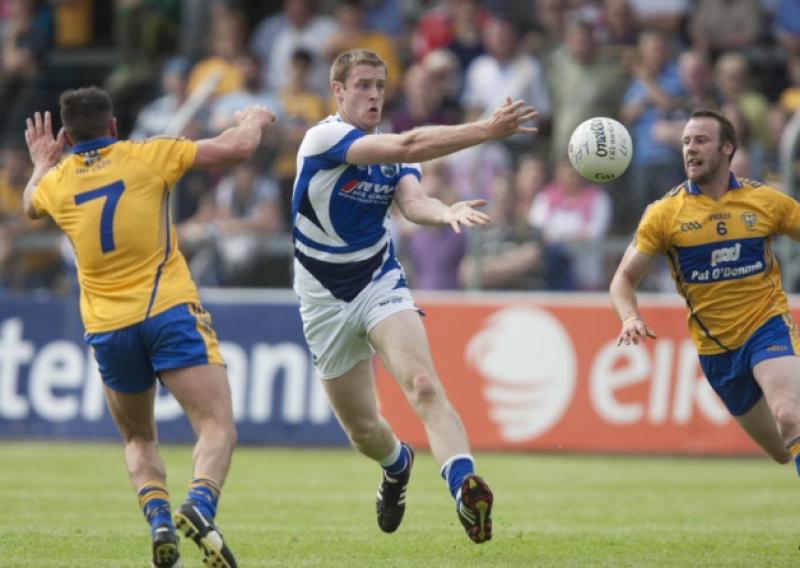 In a game eerily reminiscent of their clash with Carlow, Laois started slowly, scored a momentum building goal before half-time before crushing their opponents in the second-half to record a comfortable win.

In a game eerily reminiscent of their clash with Carlow, Laois started slowly, scored a momentum building goal before half-time before crushing their opponents in the second-half to record a comfortable win.

Against Carlow they trailed by 0-6 to 0-1. Against Clare they trailed by 0-6 to 0-2. Padraig McMahon was the man who fired Laois into life in the 33rd minute with a goal against Carlow. Last Saturday, again in the 33rd minute, it was captain John O’Loughlin who fired Laois into life with a goal after he was put through be a brilliant pass from Donie Kingston.

Again as they did against Carlow, Laois suddenly kicked into life after the goal and easily pulled away to record a victory that puts them into the next round of the qualifiers.

Once they hit their stride Laois played with a precision and fluidity that suggests they have plenty more to give in this year’s All Ireland Championship. They had ten different scorers and from the 30th minute on they kicked just three wides. In the opening 25 minutes they hit nine.

Clare caused problems early in the game with high balls into Gary Brennan and diagonal balls to Rory Donnelly but once Laois closed down those supply lines, their opponents posed little attacking threat.

From 25th minute on, Laois were outstanding defensively restricting Clare to just four further points with Mark Timmons dominant at full-back. Man of the match Darren Strong was just as effective in attack as he was in defence and he was the driving force behind Laois in the opening half hour while others struggled to get into the game.

Padraig Clancy and John O’Loughlin took over in midfield as the game progressed while the forwards had their way with the Clare defence in the second-half. Ross Munnelly top scored with 1-4 with his goal coming in the final minute after some excellent build up play from David Conway who also found the back of the net early in the second-half.

The confidence Laois played with from the 33rd minute on was in marked contrast to the opening period where Clare, under former Laois manager Mick O’Dwyer, looked to be on course for an upset.

After Darren Strong opened the scoring for Laois, Clare hit back with three points before Colm Begley added a second for Laois after ten minutes. Rory Donnelly and David Tubridy scored their second and third points respectively to put Clare three clear and by the time Graham Kelly hit their sixth after 25 minutes, Laois had just two points and nine wides to show for their efforts.

A second point from Darren Strong reduced the gap and Strong was fouled for the free on 31 minutes which Ross Munnelly converted.

At this stage Laois were still spluttering but they finally clicked into gear with 33 minutes on the clock when a defence splitting pass from Donie Kingston put John O’Loughlin through on goal and the captain made no mistake with the finish past Joe Hayes.

That proved the spark for Laois and in the final minutes of the half two points from Donie Brennan and one from Conor Meredith put them 1-7 to 0-6 ahead at half-time.

The scores flowed for Laois at the start of the second-half with Laois adding 1-5 in just five minutes with a shell-shocked Clare simply unable to respond.

Points from John O’Loughlin and Ross Munnelly were followed by a goal from David Conway after he was put through after a good move involving Darren Strong and John O’Loughlin.

After 25 minutes without a score, David Tubridy briefly stopped the rot for Clare but Laois were not operating like a well oiled machine and they kicked five points in the next five minutes with David Conway, Colm Begley, Ross Munnelly, Darren Strong and Evan Costello all finding the target.

It rounded off an impressive 16 point win for Laois who showed what they were capable of when they cut out the errors that had derailed them early in the game.

They were also able to give younger players Evan Costello and Tom Shiels playing time as Justin McNulty continues to strengthen his squad after some high profile emigrations.

There will be concern that for the second game in a row they started slowly before finding their stride and a better team would not have let them back into quite so easily but the positives from the performance far outweigh the concerns as Laois head to the next round of the qualifiers infused with confidence from back to back wins.