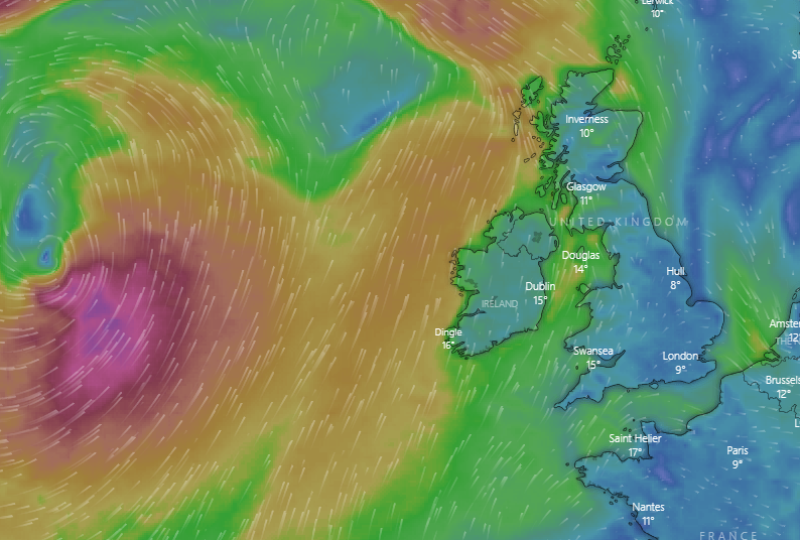 The remnants of Hurricane Sam in the Atlantic will impact Ireland's weather in the coming days say forecasters.

Met Éireann has already issued weather alerts for heavy rain on the west coast while Weather Alerts Ireland say that "models continue to show the risk of heavy rain until Saturday brought in by the remnants of Hurricane Sam.

"The system will push towards Iceland but will bring rain bands to Ireland which are expected to stall in the West of the country.

"Over 110mm of rain is expected in parts of higher ground in the South West.

"In 24 hours the evening [Tuesday] ECMWF model is showing over 90mm in 24 hours for higher ground in the South West which is above the red warning criteria of 80mm in 24 hours.

"Localised and river flooding is possible so please take care. Warnings will likely be issued by Met Eireann in the coming days," they warned.

Met Éireann has so far issued an advisory for Clare, Cork, Kerry, Limerick, Donegal and Connacht for Friday.

"A band of rain is approaching from the Atlantic and is forecast to stall over the western half of the country on Thursday and Friday, leading to persistent and heavy falls in places. This may result in some river flooding as well as localised surface flooding," they warned.

Met Éireann expects to update this advisory on Wednesday and have said "warnings may be issued."

WEDNESDAY: Mostly cloudy afternoon with rain turning heavy a times in Connacht and Ulster before clearing north during the evening. Generally drier elsewhere with just patchy rain and drizzle at times. Mild and humid with highest temperatures of 14 to 17 degrees, in light to moderate southerly winds, fresher near coasts.

Misty and murky night, with scattered outbreaks of rain and drizzle. The rain and drizzle most persistent in the west and south, remaining mostly dry further east. Remaining very mild overnight with temperatures not falling below 12 to 15 degrees, in moderate to fresh southerly winds.

THURSDAY: Dull, humid and breezy on Thursday with outbreaks of rain continuing in western counties, heavy and persistent at times, especially on high ground with a risk of localized flooding. In contrast somewhat brighter and a lot of dry weather for the midlands and east, with just a little patchy light rain or drizzle at times. Unseasonably warm with highest temperatures of 16 to 20 degrees, in moderate to fresh southerly winds.

Patchy rain and drizzle in all areas on Thursday night, again heaviest over high ground in the south and west. Very mild again with temperatures not falling below 14 to 16 degrees, in a light to moderate southerly breeze.

NATIONAL OUTLOOK
SUMMARY: Outbreaks of rain continuing until early Saturday, heaviest and most persistent in western counties where a risk of local flooding persists. High pressure moves in over the weekend, remaining in situ through much of next week as well bringing us mostly settled weather.

FRIDAY: Mostly cloudy with a mix of patchy rain and drizzle with some drier weather early on Friday, before another pulse of heavier rain pushes up from the south through the afternoon and evening. The heaviest of the rain will be over high ground in the southwest and west with a continued risk of local flooding. Warm with highs of 15 to 19 degrees, in a light to moderate southerly breeze.
The heaviest of the rain will move into eastern parts on Friday night.

SATURDAY: Cloudy and wet in the east to start on Saturday, but a clearance to sunny spells and showers will develop in the west by morning and move eastwards through the day. Highs again of 15 to 19 degrees, in light westerly winds.

SUNDAY: Mostly dry with good sunny spells and just a few showers in the north. A cooler day with temperatures returning to near average, with highs of 13 to 15 degrees, in a light westerly breeze.

NEXT WEEK: Mostly dry with a mix of sunny spells a few showers. Daytime temperatures around the seasonal norm of 12 to 15 degrees, with some chilly nights and generally light winds.