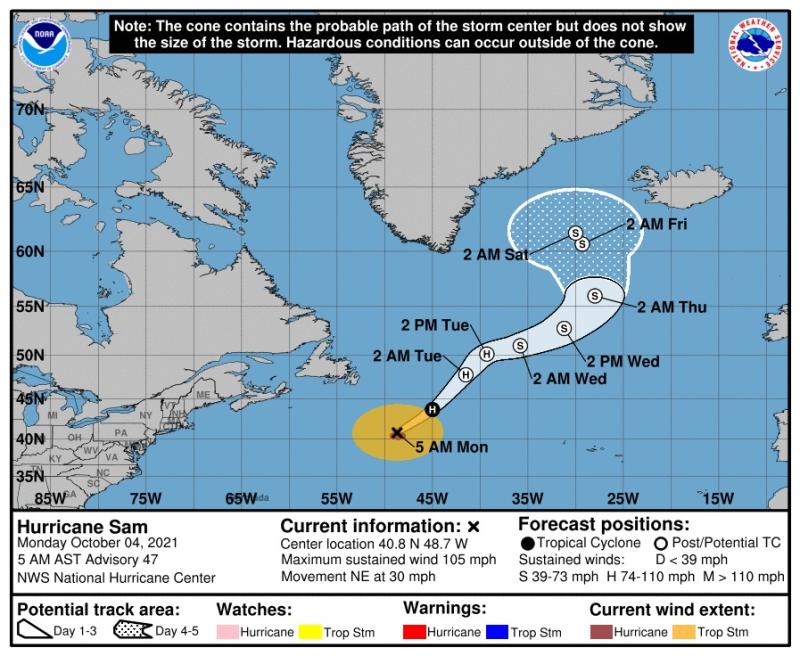 Track of the hurricane

The leftovers of Hurricane Sam which the is meandering up the Atlantic looks set to bring tropical conditions to Ireland featuring rain and higher temperatures according to a Met Éireann forecaster.

The most startling aspect of the storm's impact will be temperatures from mid-week onwards. They'll be around 15 to 19 Celsius which is well above the average maximum temperature in October is around 10°C.

Met Éireann meteorologist, Elizabeth Coleman, has commented on the impact of the weakingin ex-hurricane as it drifts by Ireland.

“The path of ex-Hurricane Sam will allow a very mild, tropical maritime airmass to move across Ireland, bringing temperatures well above average for the time of year from Wednesday onwards,” she said.

“The remnants of ex-Hurricane Sam will remain to the far west of Ireland, however the tropical airmass will bring a good deal of dull, cloudy and drizzly weather with mist and fog affecting hills and coasts. Some brighter spells may develop in the east at times. However, a weather front with waves will become slow-moving over western parts of Ireland on Thursday and Friday bringing some persistent falls of rain and the likelihood of local flooding – we have issued a Weather Advisory for some western areas where rain is expected to be heaviest," said the forecaster.

Ms Coleman looked beyond the storm to more seasonal conditions.

“The front is expected to move eastwards over the country on Friday night and Saturday before clearing into the Irish Sea. It will be followed by an area of high pressure building across Ireland for the rest of the weekend bringing more settled conditions and it will gradually turn a bit cooler again.  Next week looks fairly settled with seasonal temperature values and high pressure generally dominating, though a little rain may affect some northernmost parts at first,” she said.