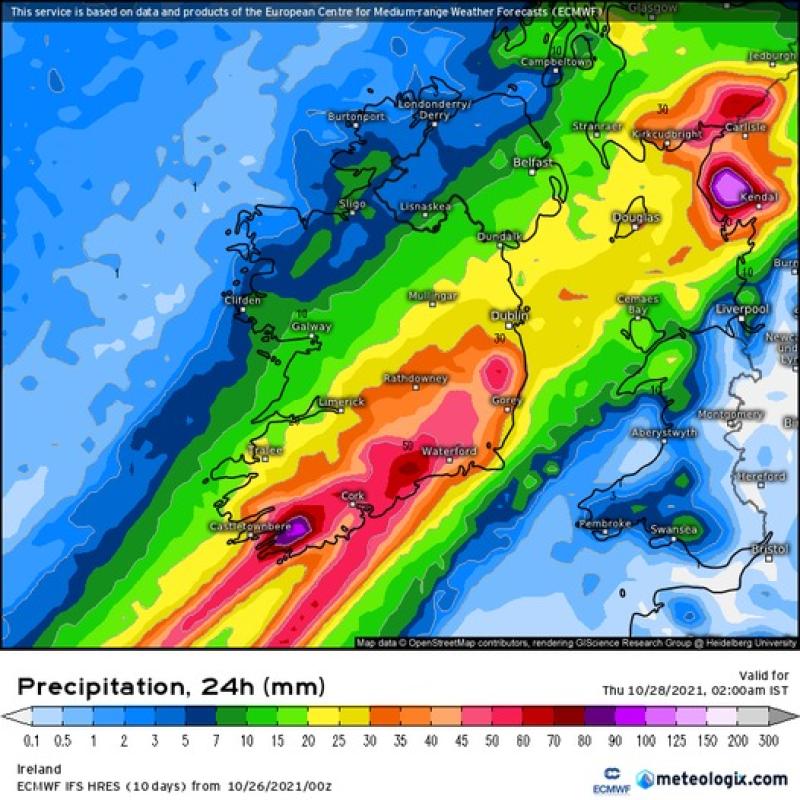 A weather forecaster is warning that Orange Weather Warnings could be issued by Met Éireann with a band of very heavy rain expected to Ireland.

In a post on Facebook this morning, Weather Alerts Ireland says that a band of rain associated with a low pressure system in the North Atlantic is expected to push over Ireland tonight bringing heavy rain to many parts of Ireland. This band is expected to persist over Ireland through tomorrow bringing very high rain totals.

According to the forecaster, on higher ground in the south west, 99mm of rain is forecast in a 24 hour period according to this morning's ECMWF model.

In south Kerry, Cork, Waterford, Wexford, Wicklow, south Kilkenny and Carlow totals of over 50mm are expected in a 24 hour period and over 70mm on higher ground which could lead to localised and river flooding.

According to the latest Met Eireann forecast, persistent rain will arrive along the west coast later in the evening and it will be wet and windy overnight as the persistent and locally heavy rain in the west extends to all areas overnight with a clearance to scattered showers developing in the north and west towards dawn. Temperatures not falling below 11 to 14 degrees as southwest winds moderate inland, remaining strong on exposed coasts of the south and southeast.

According to Met Eireann, rain will persist in the south and east through much of tomorrow, Wednesday, and there will be a risk of some localised flooding.