Spells of wet weather this week with some impacts 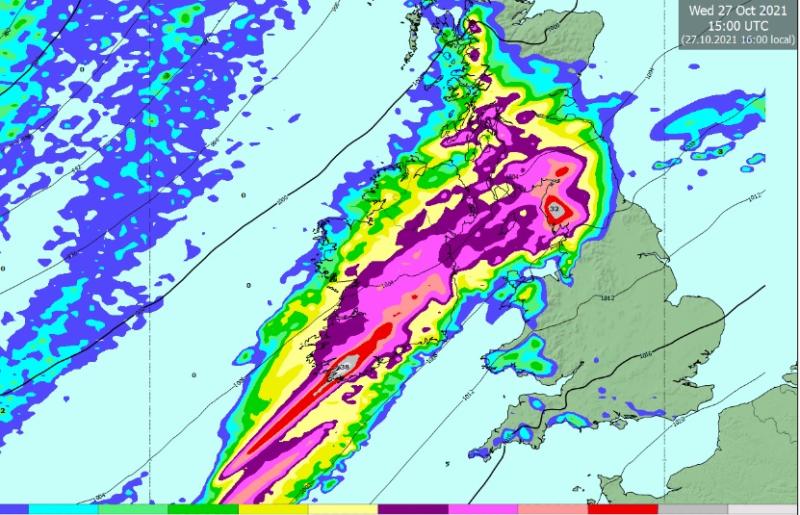 Met Éireann has issued a commentary on the weather set to hit Ireland this week due to the extent of the rain and impact it will have through the rest of the mid-term school break week.

The outlined of what to expect issued on Tuesday, October 26 says low pressure will bring spells of heavy rain across parts of Ireland this week, with impacts from local flooding possible.

Meteorologist Paul Downes said went into more detail in the commentary on what to expect.

“A slow-moving band of rain will bring spells of persistent and heavy rain tonight and through tomorrow, especially across southern and eastern parts of Ireland. Around 20-40mm rain is expected, with southern and eastern areas potentially seeing higher totals – particularly the higher ground of Cork and Kerry.  These high rainfall accumulations may lead to impacts in areas, such as tricky driving conditions, delays to public transport and localized flooding.

“Further spells of wet weather are expected tomorrow night and through Thursday with another 30-50mm rain possible, once again the greatest amounts are expected across southern and eastern areas.  As well as the possibility of rivers flooding locally, at this time of year the risk of surface flooding can be increased due to fallen leaves blocking drains.

"It’ll also turn a little fresher later in the week as a cooler airmass gradually pushes in across Ireland, and while the winds will generally ease later in the week, current indications suggest it may become quite unsettled again over the weekend with a spell of wet and possibly windy weather crossing the country on Sunday," said the forecaster.

Met Éireann has issued a Yellow Rain warning for southern and eastern parts of the country, starting early on Wednesday and lasting until Thursday morning.

To read the commentary go here. For the most accurate and up to date forecast for your area on the Island of Ireland go to www.met.ie.