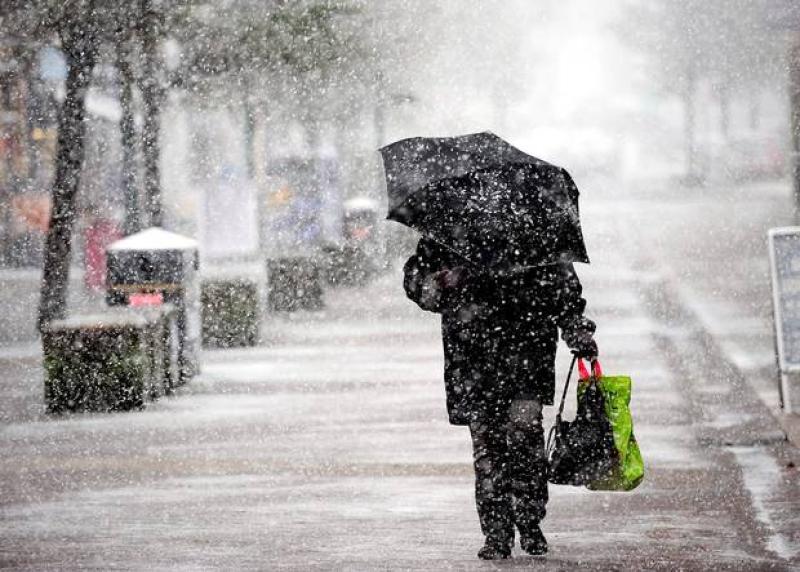 Storm force winds are set to hit Ireland on Tuesday with heavy rain and even some snow possible Met Éireann has warned.

The official wind and rain warning for Ireland was issued on Monday but comes into effect at 10pm on Tuesday night. It will remain in place until 3pm on Wednesday.

Met Éireann said there will be "heavy rainfall on Tuesday night and Wednesday, possibly turning wintry in places."

They added that it "will be accompanied by strong to near gale force and gusty southerly winds.

"This will lead to hazardous driving conditions and localised flooding."

This warning follows an earlier Status Yellow wind and rain warning for ten counties from 4am on Tuesday until 3pm on Tuesday.

Met Éireann warned of "strong to near gale force and gusty southeast to south winds on Tuesday morning and afternoon.

"These winds will be accompanied by heavy rain clearing to squally showers through the afternoon, with hazardous driving conditions and localised flooding possible."

A Status Orange storm warning for sea areas from Valentia to Slyne Head to Rossan Point is in place from Tuesday from 6am to 1pm.

"South to southeast winds will reach storm force 10 for a time Tuesday morning and early afternoon," said the forecast.

The national weather outlook from Met Éireann through the week features unsettled conditions with rain and showers. It will be breezy or windy at times too. DETAILS BELOW TWEET.

Becoming very unsettled for the rest of the week with some very wet & windy conditions at times, bringing some localised flooding ☔️
Also some brief wintry periods possible as temperatures fluctuate
Keep up to date with the latest weather warnings⚠️
https://t.co/ozrQHtoOkt pic.twitter.com/QavosZGG47

NATIONAL FORECAST issued by Met Éireann on March 7 at 11:22am.

MONDAY NIGHT: Turning windy overnight but largely dry initially with some clear spells. Lowest temperatures generally of 0 to 3 degrees with a touch of frost in places. Milder in southern parts with patchy light rain and drizzle pushing northwards. Fresh to strong and gusty southeasterly winds will develop, increasing near gale force in the southwest. Towards morning, a band of heavy rain will move in from the southwest and extend over much of Munster by morning.

TUESDAY: Windy and wet to start with strong to near gale force and gusty southeast to south winds. Tomorrow morning, rain in the southwest will track northeastwards with some heavy falls, especially in parts of the south and Connacht with localised flooding possible. A clearance to squally showers, with a chance of thunderstorms and hail, will follow in from the southwest later in the morning, extending northeastwards through the afternoon and evening. Highest temperatures of 6 to 10 degrees with winds easing moderate to fresh in the afternoon.

Becoming wet and windy through the night as a further spell of rain pushes into the southwest, extending across the country through the night. The rain will be heaviest with a chance of spot flooding over the western half of the country, where it may turn wintry for a time, especially over high ground. Southerly winds will increase fresh to strong and gusty. Lowest temperatures of 0 to 4 degrees, but turning milder with the arrival of the rain.

Wednesday: Wet and windy at first with fresh to strong and gusty southerly winds and widespread heavy rain, bringing a further chance of spot flooding. Some falls of sleet too, especially ahead of drier, brighter and colder conditions, along with moderating northwesterly winds. These will move into the west and southwest during the morning, extending eastwards as the rain clears into the Irish Sea by early evening. Afternoon highest temperatures will generally range between 5 and 9 degrees.

Largely dry with mostly clear skies to start, but cloud will build from the west overnight. Mostly light westerly winds will back southerly and increase moderate to fresh by morning. Cold with lowest temperatures of -3 to +1 degrees generally with frost developing.

Thursday: Becoming breezy through the morning and afternoon as fresh and gusty south to southeast winds develop. Mild, cloudy and mostly dry for daylight hours but there will be patchy rain and drizzle at times, mainly in southern and western areas. Highest temperatures of 8 to 10 degrees. Later in the evening, a band of rain will move in from the west, tracking eastwards through the night with some heavy falls and clearing to showers over the western half of the country by morning. Milder than previous nights with temperatures not falling below 6 to 8 degrees.

Friday: The last of the overnight rain will clear from the east early in the morning to leave a day of sunny spells and showers. The showers will be heavy or thundery at times with possible hail. Highest temperatures of 9 to 12 degrees in moderate, occasionally fresh, southwesterly winds.

Further outlook: Continuing unsettled over the weekend with further spells of rain and showers. Highest temperatures generally of 8 to 10 degrees.