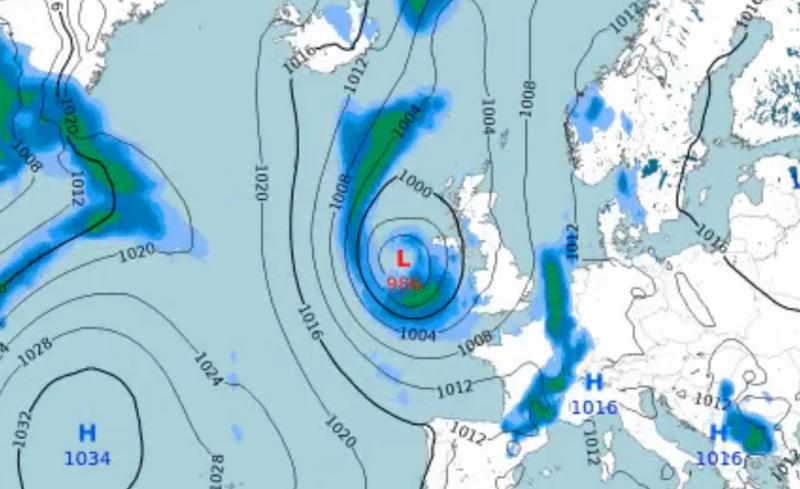 Met Éireann has added Laois to a Status Yellow rain and thunderstorm warning.

The forecaster widened the warning beyond Munster and Connacht to Laois, Offaly, Kildare and Westmeath on Friday eveining, June 24.

Met Éireann warns that heavy showers or longer spells of rain with thundery downpours in some places may lead to spot flooding, with the highest rainfall totals likely to be near the west coast on high ground.

The warning is valid from 9.09pm on Friday  to 6pm on Saturday.

The outlook for the rest of the weekend includes wind warnings for coastal areas and unseasonably windy cooler conditions everywhere.

Beyond that Met Éireann expects the unsettled and cooler weather to remain with rain and heavy showers at times. MORE DETAILS BELOW TWEETS.

It will be unseasonably windy & wet with mostly strong southerly winds ☔️⚠️

Rain will fall over the western half of the country, heavy at times ️

Mostly dry across the eastern half of the country ️

Windy or breezy much of the time too with unseasonable cool temperatures in the west tomorrowhttps://t.co/Xg3aMJlyuS pic.twitter.com/RnARZnjeXS

Friday night: Rain will continue across much of the western half of the country tonight, potentially turning heavy and thundery with possible spot flooding. Further to the east, it will be clearer with isolated showers. Staying blustery with brisk southwest winds, and gales along west and southwest coasts. Lowest temperatures 7 to 10 degrees.

There will be further spells of rain and showers across the country during Saturday night. Lowest temperatures of 8 to 10 degrees with moderate to fresh southwesterly or variable winds.

SUNDAY: A mix of sunny spells and widespread heavy and possibly thundery showers. Highest temperatures of 13 to 16 degrees in moderate to fresh southwesterly or variable winds.

A mix of clear spells and scattered showers, heaviest and most frequent in the west and northwest on Sunday night. Lowest temperatures of 7 to 11 degrees with light to moderate southwesterly breezes.

MONDAY: Staying unsettled with widespread showers, turning to heavier more persistent rain in the western half of the country later in the day. Highest temperatures of 13 to 17 degrees with moderate southerly winds.

A band of rain will spread across the country overnight, clearing to showers in the morning. Mild with lowest temperatures of 11 to 14 degrees as fresh southerly winds moderate.

TUESDAY: Persistent rain will clear away to the east early on Tuesday, leaving a mixed day for all areas with sunny spells and scattered showers. Highest temperatures of 14 to 20 degrees, warmest in the east. Winds light to moderate, southerly or variable.