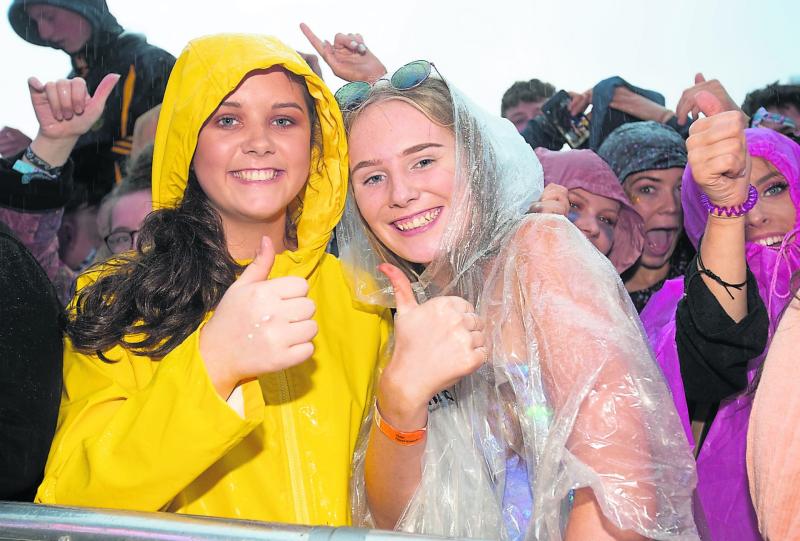 Met Éireann has issued a weekend weather advisory for Ireland as up to 70,000 descend on Laois for the Electric Picnic in Stradbally.

The Forecaster issued a Weather Advisory for the whole country for what it says will be "wet and windy weather this weekend may cause disruption".

While it does not have the status of a weather warning, Met Eireann says it issues weather advisories to provide early information on potential hazardous weather.

The weather outlook from the forecaster says that there will be wet and blustery at times over the weekend as a "very unsettled spell begins".

Weather charts published by the forecaster show that Saturday over Stradbally could be the wettest day while the nights could also be soppy.

A Status Yellow rain warning has been issued for  for Antrim, Armagh, Down, Tyrone, Derry for Saturday.

For the rest of today & tomorrow (1st day of meteorological autumn), it’ll be mainly dry with good sunny spells️

Spells of rain over the weekend heavy at times️

National Forecast issued on September 1 at 5:35pm by Met Éireann.

Friday: The morning will begin mostly cloudy with scattered showers in the east. Rain will develop on the west coast by afternoon, with drier, sunnier conditions through the midlands. Highest temperatures of 17 to 22 degrees, in light variable breezes.

FRIDAY NIGHT: Cloudy with outbreaks of rain turning persistent and locally heavy at times. Lowest temperatures of 8 to 11 degrees in Munster and Connacht, but not falling below 12 to 15 degrees in Ulster and Leinster, in light variable winds.

SATURDAY: It will be a cloudy start on Saturday morning with rain persisting in part of Ulster and Leinster throughout the day, but sunny spells and showers push in to the south and west. Highest temperatures of 14 to 18 degrees, in light to moderate southeast or variable winds.

SATURDAY NIGHT: While there is still some uncertainty about the extent of how windy it may get on Saturday night and Sunday, generally It looks like wet and blustery conditions will extend from the south across the country on Saturday night with some heavy falls of rain at times. Lowest temperatures of 8 to 13 degrees generally as fresh and gusty southeasterly winds veer southwesterly later. Although it should be noted that winds may be stronger locally.

SUNDAY: Rain, heavy at times will gradually clear northwards on Sunday morning, followed by sunny spells and a few showers in the afternoon. Highest temperatures of 15 to 20 degrees, warmest in the east, with fresh to strong and gusty cyclonic variable winds will become southerly and moderate during the afternoon.

SUNDAY NIGHT: Wet and blustery conditions will return on Sunday night clearing to showers from the south by morning. Remaining mild with temperatures holding above 10 to 15 degrees generally in moderate to fresh and gusty east to southeast winds.

MONDAY: Sunny spells and widespread blustery showers. Highest temperatures of 15 to 20 degrees in moderate to fresh and gusty southeasterly winds.

OUTLOOK FOR EARLY NEXT WEEK: Low pressure will remain, dominating the weather for the rest of the week over Ireland with further blustery showers or longer spells of rain at times and highs in the upper teens.