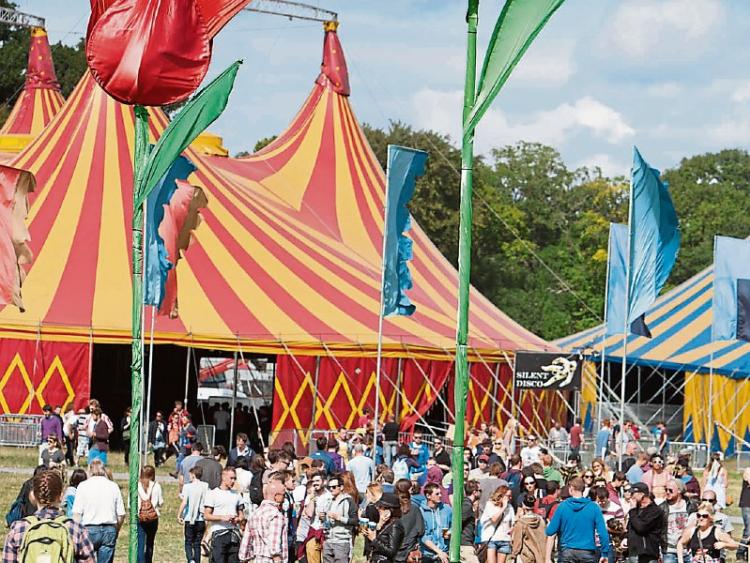 The dystopian mobiletropolis of Trailer Park gathers up its rag-bag of makers, and settles in Cosby land – with 30 miniature stages or creations stuffed into caravans and horseboxes and mobile homes and shipping containers and repurposed vehicles.

There is no sense to the Trailer Park community: it’s an artistic haven, a camp with a love of the ridiculous, and it is the place to spend time if you want laughter in your weekend.

The Mobile Home Stage is the anchor of the futuristic retro-town – with performances from CC Brez, Cirque du Sol, Mutefish, Dublin Ukulele Collective, The Young Folk The High Hopes Choir, Stomptown Brass, Trinitones, Pearl TN, Paddy Dennehy & The Red Herring, Attention Bébé, Le Freak, Costello, Emma Lou & The Agenda, The Great Okwado, Manden Express, Lethal Dialect, VOXX, The Luna Boys, Aindraias De Staic & The Lacthikos, Daoirí Farrell, Spudgun, Zaska, Spring Tides, Steve Bennett, Dylan Tighe, Jaime Nanci, Risky Business, Tongue Bundle, The Bloody Quills, The D-ridiculous Allstars and you will also happen upon the runway models of Junk Kouture presenting their latest outrageous dresses, or stumble upon the Dress Well or Die Trying folk, who will give you a last chance not to look like you pulled on the same trousers you had on in the office to come to the festival wearing.

One of the highlights of the entire Electric Picnic has to be the Father Ted endorsed Rubbish Song for Europe, in which musicians Neil Hannon and Cathy Davey complete their search for a replacement for My Lovely Horse, (Season 2 Episode 2). On hand will be most of the clerical cast of the TV show, as well as Eurovision contestants The Swarbriggs as 15 finalists take to the stage with their compositions; as well as a number of famous comedians and musicians to whom pride is nothing more than a loaf of bread.

This all takes place in the now world-famous My Lovely Ranch area of Trailer Park, in which a small zoo of rescue animals - mostly sleepy old horses and forgetful donkeys and hairy canines – offer a soft landing for Picnickers in need of a hug and some reassurance.

On the stage hewn of hay bales, surprise acts pop up (musicians from The Villagers, Bellx1, Divine Comedy last year), and a steady flow of comedians find themselves hoodwinked into doing a turn.

Caravan World thrives, with a host of new two-wheeled creatures on show, and an expanded streetscape of a few old friends. Remember the Incredible De-Programming Machine? Imagine that the Russian Olympic team’s medical expert paid them a visit during the night. Yes, things have got out of hand. The Bus That Fell From The Sky has met a new fate. Caravanaoke has been pimped up a little, there’s a little more spring in the suspension of a caravan overloaded with bad singers. Car Au Vin returns with a suite of sommeliers (or are they comedians), a Parisian accordion player, some escargot, and a French family-run wine business that is falling apart at the seams. Plastic Fantastic are back, recycling unwanted junk into unwanted junk, and being the coolest cats at the Picnic. Kelly Lou is back with cakes. Lord Ganesh’s Larder is back with curry. Mirror Maze have repaired their wing mirror. Science Gallery’s white-coat brigade return with pencils behind their ears. The Redneck Wedding collective take delivery of their revolting ‘static’ and pull out the deckchairs for the weekend, as Donald Trump comes to visit them on the canvassing trail. Caravan Club Extravaganza, hosted by the crimson-faced happy-man Dermot Mulgrew, returns with a senseless cocktail of beatboxing masterclasses, comedy out of a caravan, and some of the finest discoveries in intoxicating music you will happen upon all weekend.

Tow-Ho-Ho is, without apology, a timely reminder that we mustn’t forget Christmas this year: live carol music for three solid days; an inebriated Santa experience, and a chrimbo deco overload the likes of which you wouldn’t even find on the side of a house on the N60 from Claremorris to Castlerea.

To Let is a 360-degree Estate Agent experience, complete with property brochures and scheduled show-arounds by suited gentlemen with contrite grins…. in a caravan.

Snail O’Van is the ambitious business venture of Eva Milka, whose Gallic Escargot snail-breeding business has graduated from her Kilkenny bedsit walls to this brainwave, which snuck past the finest minds in Dragon’s Den without them noticing.