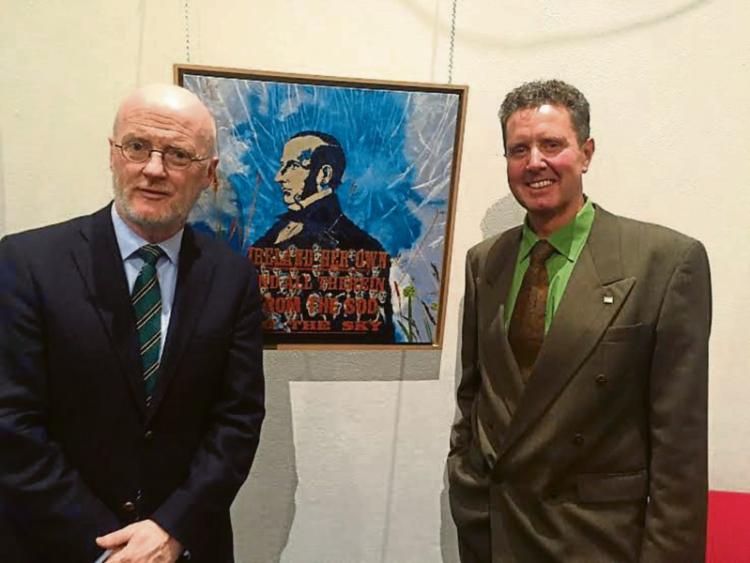 Brendon Deacy’s exhibition, titled Siorai: Visualising the Words of James Fintan Lalor Today' recently returned from Australia where it showed at the Museum of Australian Democracy at Eureka, Ballarat, Victoria as part of the International Culture Programme to celebrate Ireland 2016.

The exhibition was launched by Noel White, the Irish Ambassador to Australia who travelled from Canbera for the occasion.

The Australian trip originated for the exhibiton when one of its pieces was presented to the Museum of Australian Democracy in Eureka (MADE) by Margot Coogan, Lalor Clan Chieftain who was invited to the 160th anniversary celebrations of the Eureka Stockade in Ballarat.

This lead to an official invitation to Brendon to exhibit the show at MADE in 2016.

The exhibiton ran in Eureka from early July to September 11 and Brendon Deacy described the experience as been “absolutely brillant.”

“It represented the reunification of two brothers - James Fintan and Peter,” he stated

“It was a wonderful experience, a life enhancing experience and I am eternally grateful to Muireann ni Chonaill, Laois Arts Officer and to Margo Coogan, Lalor Clan Chieftain.

“Visitors to the exhibition in Australia were intrigued that I had used materials from Tenakil House in the paintings, creating a kind of transcentdal link.”

‘Síoraí’ originated from a commission by Laois County Council who asked Brendon to produce new work as a central feature for the James Fintan Lalor conference 2014.

The exhibition’s title, ‘Síoraí’ (the Irish word for ‘Eternal’), refers to the enduring influence of James Fintan Lalor's words on key parts of Irish history, right up to the present day.

Pádraig Pearse called Lalor ‘one of the four evangelists of Irish freedom’ so the timing of the show was befitting to mark the 1916 centenary of the Irish Easter Rising as it highlighted the galvanising impression he made on visionaries like Pearse, and those who drafted the Democratic Programme of the first Irish parliament in 1919.

Brendon created ten iconic paintings using oils mixed with debris collected from Tenakill House, Raheen where Lalor was born, significantly forging a metaphysical connection between the work and the man.

To emphasise his contemporary relevance, Lalor’s words are presented verbatim in the style of Irish posters of his time and juxtaposed with depictions of present-day Ireland.

The venue’s location in Australia was ideal for building on the strong links between both countries culture and history.

The Museum stands on the site of the Eureka Stockade, an event that shaped Australian democracy. It was lead by James Fintan’s brother, Peter.

Peter Lalor’s contribution to Australian politics and human rights is celebrated at MADE who state, “James Fintan Lalor, as Peter Lalor’s brother, is of significant interest to the museum.

“His influences on his younger brother and the Young Ireland movement trace directly to the events in Ballarat in 1854.

“The presentation of these influences and issues by Brendon Deacy also resonate with the challenges that both Ireland and Australia face today down through the centuries.”