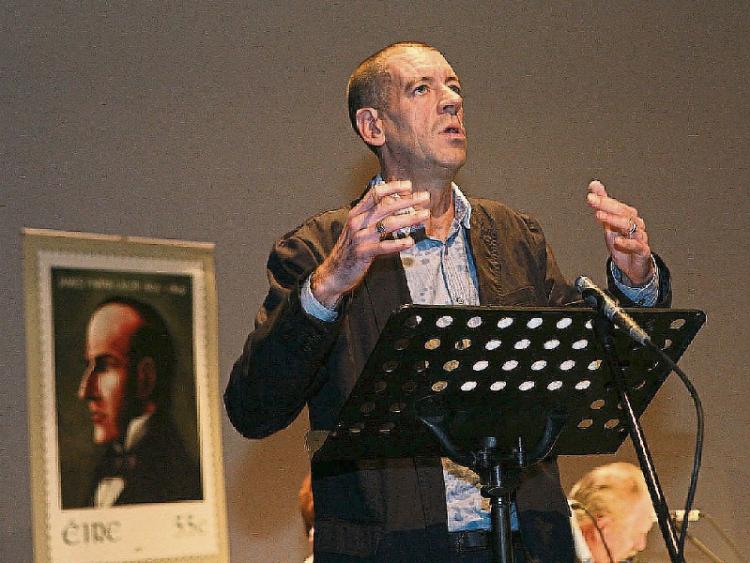 This year's James Fintan Lalor Autumn School features an array of panellists drawn up from the academic, media, artistic and historical worlds.

The Emo based artist is also hosting his new exhibition 'Unfettered Man of Letters' of memorabilia linking Fintan Lalor and 1916, which will be on display in the foyer of the Dunamaise Arts Centre.

Brendon has recently returned from Ballarat in Austrailia where his exibition Siorai:Visualising the Words of James Fintan Lalor today, showed at the Museum of of Australian Democracy in Eureka.

The morning panel debate is on the theme of “1916: What are we remembering and why?” and will be chaired by Diarmuid Ferriter, Professor of Modern Irish History at University College Dublin.

He was the visiting Burns Library Scholar at Boston College 2008-2009.

His main research interests include the social, political and cultural history of 20th century Ireland.

He studied history at University College Dublin and Trinity College Dublin. He lectured for several years at Trinity, before moving to NUI Maynooth as a Governement of Ireland research fellow. He joined Queen's University in 2002. He was joint editor of Irish Historical Studies and is a member of the editorial board of Proceedings of the Royal Irish Academy Section C.

Dr McGarry specialises in modern Irish history. More recently, his resarch has focused on the revolutionary period, with books on the Easter Rising and a collective biography of seven rebels associated with the Abbey Theatre.

Conor Brady is former editor of the Irish Times and is currently a columnist with the Sunday Times.

Catriona Crowe is Head of Special Projects at the National Archives of Ireland.

Eve Morrison is a Historian and Author. She studied history at Trinity College Dublin and recently completed a PhD entitled ‘The Bureau of Military History: Separatist Veterans’ Narratives of the Irish Revolution, 1913–1923’.

The Afternoon Session will commence with a Soap Box by Lorrain Comer, Head of Education at the National Museum of Ireland. She will speak on the 1916 commemoration froma National Museum Viewpoint.

Lorraine holds a Bachelor of Arts degree in History and English; a Higher Diploma in Education and a Masters degree with honours in Modern Drama Studies from University College Dublin.

The History Ireland Hedge School will commence at 2.15pm on the subject of “Were the ideals of the 1916 Rising subsequently betrayed?”

The panel debate will be chaired by Tommy Graham, Editor of History Ireland.

He is a founder and editor of History Ireland, the country’s only illustrated history magazine.

He lectures in Irish history and politics at Griffith College and formerly at Tisch NYU.

A presenter of Newstalk’s ‘Talking History’, he’s also a regular contributor to the station’s Moncrieff show.

At the 2010 Electric Picnic he kicked off his latest project, History Ireland Hedge Schools, an ongoing series of round table discussions of historical and contemporary interest.

Robert Ballagh is one of the best known contemporary Irish artist, painters and designers. His painting style was strongly influenced by pop art.

He is particularly well known for his hyperealistic renderings of well known Irish literary, historical or establishment figures.

Conor McNamara is the 1916 Scholar in Residence at NUI Galway. Conor's research focuses on political violence and social upheaval in 19th and 20th century Ireland.

He has written extensively on food shortage in the West in the first half of the 19th century, social upheaval during the revolutionary period, and the intersection between political violence and banditry.

Mary McAuliffe is an author and Assistant Professor at UCD School of Women's Studies.

She currently teaches on the UCD Women's and Gender Studies postgraduate, undergraduate and Outreach Programmes.

Susan McKay is Director of the Glens Centre in North Leitrim. An award winning journalist and writer she oversees the The Glens Centre which was established in late 1980s as part of a cross-community project to revitalise north Leitrim. It has pioneered the concept of the performance laboratory, in which artists can come to the centre and share the space with the local community as part of developing new work.