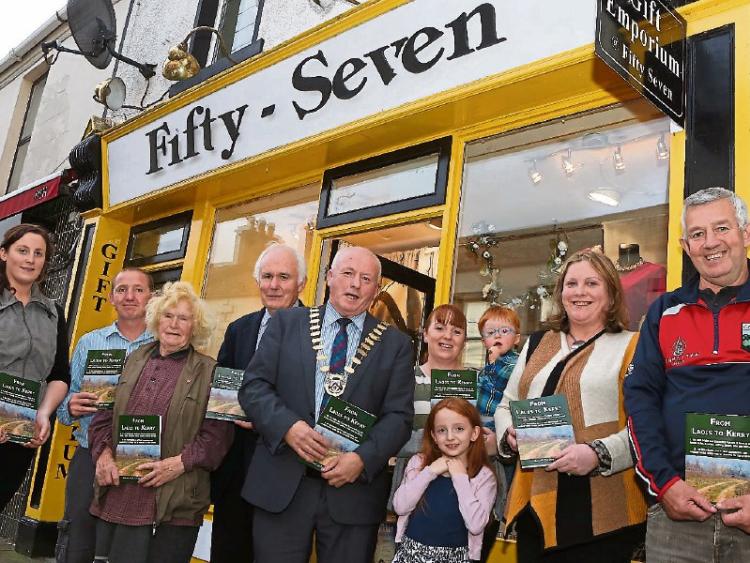 A new book on the Seven Septs of Laois, ‘From Laois to Kerry’ by Dr. Michael Christopher Keane, which explores the strong links between the Seven Septs and County Kerry, will be launched next month in association with the Laois Heritage Society.

In the book Dr Keane of University College, Cork, explores in detail an important but almost forgotten aspect of the Seven Septs which involves the transplantation of many of them to Co. Kerry in the early 1600s following the ending of the many bloody battles in Laois between the Septs and the incoming English planters.

Dr Keane, a native of Kerry, is himself a descendant of the transplanted Laois McEvoys in Kerry and his wife Agnes McEvoy-Miller also has strong Vicarstown roots.

The book commences with discussion of the many bloody battles between the Seven Septs and the English planters which eventually culminated in an agreement by the Seven Septs leaders at Lalors Mills in 1607 to accept resettlement in Kerry, being under sentence of death if returning to Laois. It then details the continuing strong presence of all seven of the Laois Seven Sept surnames in Kerry through the centuries to the present time, Moores, Kellys, Lalors, Dowlings, McEvoys, Dorans and Deevys (Dees in Kerry). Remarkably many have remained in or close to the same set of parishes in Kerry that their distant ancestors were transplanted to over four hundred years ago.

Dr Keane also discusses the still not fully understood role of Patrick Crosbie, their transplanter and landlord in Kerry who was an important figure in Irish history. It is now fully accepted that Patrick Crosbie, along with his younger brother John, second Protestant bishop of Kerry (1601-1621), were imposters, acting as English gentry while in reality being MacCrossans, bards to the O’Moores of Laois. Both were married to Laois Septs wives, Patrick to an O’Moore and John to an O’Lalor respectively .

However there remains a doubt about Crosbie’s true allegiance, as a recently uncovered secret document from the period claimed to expose him as a double agent, maintaining high office in the Pale in Dublin while acting as a spy for Owny Rory O’Moore, the leader of the Laois Septs. As well as acquiring vast estates in Kerry which facilitated the Septs transplantation, Crosbie also built Crosbie castle on his large estate in Ballyfin which had been granted to him by Queen Elizabeth I.

Finally the book discusses the remarkable life of Crosbie’s successor Sir Pierce Crosbie. Along with inheriting the great estates in Laois and Kerry, Sir Pierce, MP in the Irish Parliament representing Queens County (Laois), was a cupholder and gentleman of the Kings bedchamber of successive Kings, James I and Charles I, in London.

He was a successful military commander on the continent with a regiment apparently drawn substantially from the Laois Septs, the only Catholic regiment permitted in the English army of the time.

He lost his estates and was jailed due to his implacable opposition to the Irish Lord Deputy Wentworth, only to regain them when Wentworth was executed for treason.

He was also closely associated with what is arguably the most notorious sex scandal in British history in which his stepson the Earl of Castlehaven was executed for sexual depravity.

His remarkable career ended in support of the Irish Catholic Confederacy in its conflict with Protestantism in Ireland in the 1640s.

The book will be launched by Barry Walsh, Monasterevin, of the Laois Heritage Society at Vicarstown Heritage Centre. It will take place on October 20th at 8 pm and light refreshments will be served.

Michael is donating €5 from each book sold on the night to Laois Down Syndrome,