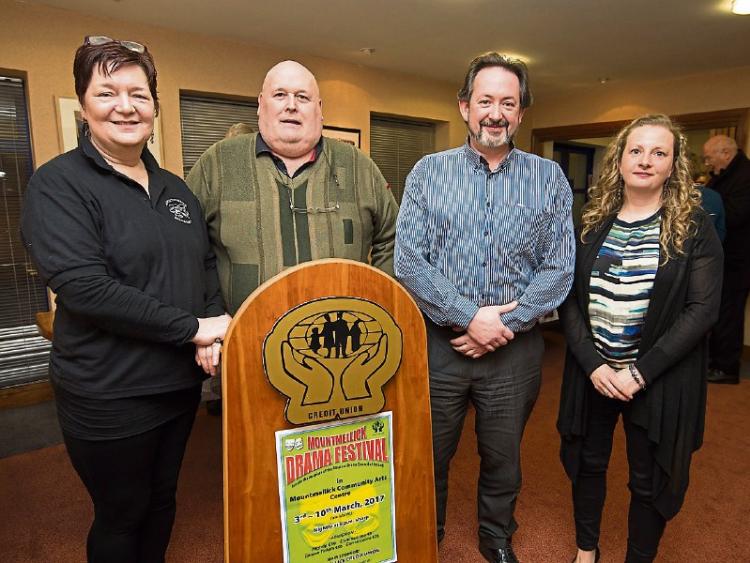 Preparations are well underway for the 27th annual Drama Festival in the Community Arts Centre, Mountmellick.

The official launch of the festival took place in the offices of the main sponsor, Mountmellick Credit Union.

Shay Flannery welcomed everybody with his usual lively banter and quick wit and everyone settled down to listen to a synopsis of the plays being presented and a brief history of the performing groups.

Michelle de Forge, director of the Dunamaise Arts Centre, performed the official launch and was very inspiring and passionate in her commentary.

A regular attendee of the festival she commented on the excellent standard of performance and presentation in both the the open and confined section of the festival.

Mary Culleton spoke on behalf of, Mountmellick Credit Union, who are pleased to be able to continue their sponsorship of a great community event.

She commented on the number of young committee members which she was pleased to see and the inclusion of Mountmellick Men's Shed Choir who provided the entertainment for the evening.

The adjudicator for the festival this year is Tony McCleane Fay from Cork.

The groups will compete in either the open section, hopefully gathering points along the way with the ultimate aim to reach the RTÉ All Ireland Drama Finals in Athlone, or in the confined section.

There is a varied programme again this year which runs from Friday, March 3 to Friday March 10.

Patrons will recognise plays such as The Field. Amphitheatre Company from Co Clare have the honour of opening this year's festival with their production of the JB Keane penned classic on Friday 3rd March

Two groups perform plays by Tullamore playwright Marina Carr. The Glenamaddy Players from Co Galway perform By The Bog of Cats on Saturday night while The Nenagh Players from Co Tipperary put on Ariel on Wednesday.

Conor McPherson's The Birds, performed by Galway group Compántas Lír, is Sunday's offering followed on Monday by The Dalkey Players from Dublin who stage Dead Man’s Cell Phone by Sarah Ruhl. On Tuesday, The Moat Club from Naas in Kildare stage God of Carnage by Yasmina Raza.

The Slieve Aughty Drama Group from Clare take on the play Rabbit Hole by David Lindsay Abaire on Thursday night. The festival concludes on Friday, March 10 when the Take 5 Drama Group from Cork perform the Telephone Exchange by Niamh Gleeson which is a brand new piece of writing.

This mix ensures that every theme is covered and there will be a play to suit all tastes whether comedy, tragedy or pathos appeals.

The festival committee wish to thank their sponsors and patrons for their continued generosity and support.