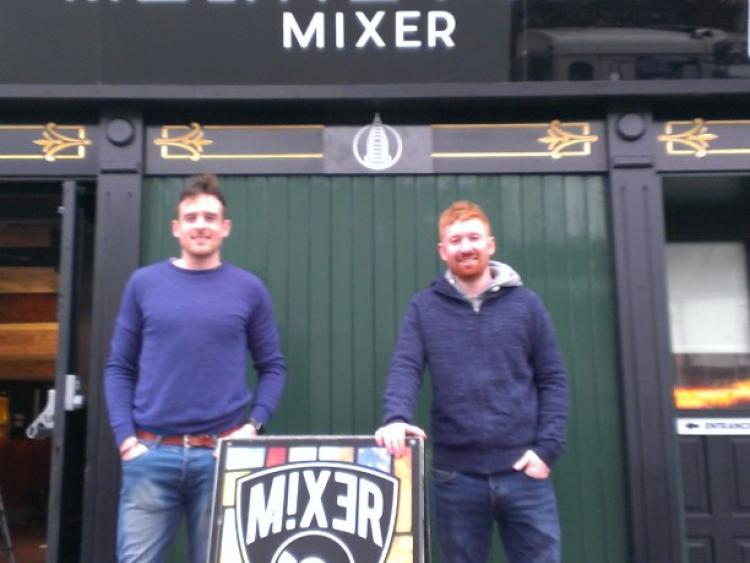 Kieran Lillis and Brian Dunne move the Mixer to the Top Square this weekend.

This Saturday is sure to be one of the biggest nights of the year on the town in Portlaoise with the opening of the Manhattan Mixer at its new home on the Top Square.

Kieran Lillis and Brian Dunne, both from Portlaoise, are set to open a new chapter in the rapid raise of their pub / night club when it opens at 7pm this Saturday, March 11.

The lads are excited about the move which comes just two years after they first started in a small premises on Main Street. Kieran and Brian were 'flat out' putting the final touches on big overhaul to the premises which was the former home of Coppers night club and before that Keegans. It's an ambitious step for the young men but they are confident of success.

"We've going since 2014 and gone from strength to strength since," Kieran told the Leinster Express. "We've gone from having a capacity of 150 people above Grellan Delaney's to a premises with a capacity for 800 guests".

This time last year they moved to the Blue Door which had a capacity to hold 700 people and regularly packed in the crowds so a move up by a hundred should not be a big reach.

"It's a big step but the right step at the right time," said Kieran a popular Gaelic footballer with Laois and Portlaoise.

The young men have put their money behind the project and big renovation has been carried with specialist team brought in to work on the job round the clock.

"We are after renovating front and back. There is new look to the place - we've brought our 'Mixer Look'," said Kieran.

He said the good door policy, good drink deals and free entry has been key to the success. Kieran is also confident the expansion will not interfere with the football.

"They gone hand in hand for the past three years and I'll continue to work hard at both," he said.

DJs Steven Warde and Brendan Lambe (Lambo), who have moved with the lads to the new premises, will be spinning the discs on opening night. There will be around 32 on duty on opening night between bar, floor and security staff.

For opening night there will be specials on two cocktails and fun will go on until late.

As well as moving the Mixer, Kieran and Brian are taking over the management of the Welcome Inn which is also on the Market Square. They don't have any plans to change what is one of the best known pubs in town.