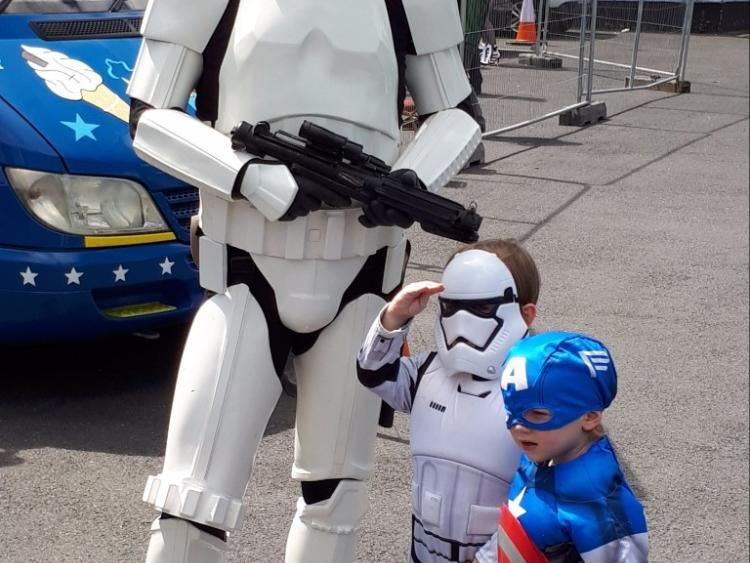 Aren't you a little short for a Stormtrooper?

There was sword fighting in the car park, supervillains in the shadows, and armed troops on the streets - and still last Saturday proved to be one of the family-friendliest days Portlaoise has ever seen.

O’Loughlins Hotel on the Main Street was the venue for Celtic Con - Ireland’s Midland Comic Convention, a one-day festival of comics, film merchandise, toys, collectibles, cosplay and all round fun, organised by Mountrath man and lifelong comic fan Martin Moore.

The inaugural comic convention provided a day out for kids with a difference, with the imposing figures of Imperial Stormtroopers, the white-uniformed foot-soldiers of Darth Vader in the Star Wars movies, mingling with the crowds.

The troops were all part of the 501st Legion, the Irish branch of the world’s top Star Wars costuming club, who gave a detailed talk on the fundraising and numerous events carried out globally by these dedicated volunteers.

The guys also handed around props such as a deactivated and modified Sterling sub-machine which had been converted to an E-11 blaster, the standard issue weapon of Imperial Stormtroopers as used in the original Star Wars movies.

Also on display was a replica of the blaster rifle used by the baddest bounty hunter in the galaxy, Boba Fett, and an array of Imperial troop helmets.

In what is perhaps a fanboy’s dream of a sci-fi/fantasy crossover, at one point The Almighty Thor was seen handling a Stormtrooper helmet, with the relish of an Asgardian god holding the head of a vanquished enemy.

The lady Thor was one of the winners of the Cosplay competition, where devoted fantasists can realise their dream of becoming their favourite characters before an adoring crowd.

Also strutting their stuff before the judges were Cheetara from Thundercats, Supergirl striking some superheroic poses, a young padawan Jedi, and a full superpowered family complete with a baby Wonder Woman, who was easily the cutest sight of the day.

Among the special guests were Rathdowney’s own Nigel Flood, creator of Irish superhero comic Celtic Clan, and Anthony Roche, who set up the very first Marvel Comics fanzine this side of the Atlantic way back in 1966.

Anthony, a true comic book fan, was lucky enough to have had a number of letters printed in Marvel Comics in the 1960s and he brought these prized possessions along to the convention, along with the original fanzines which he crafted, Heroes Unlimited. Both Anthony and Nigel took part in an informative panel discussion on the comic industry.

With a host of stalls selling Irish crafts and arts, not forgetting boxes of comics boasting the best back issues of superhero exploits from yesteryear, the first ever Celtic Con has laid the groundwork for a true Laois tradition to be established, with plans already afoot for next year’s festival to unfold over two days.