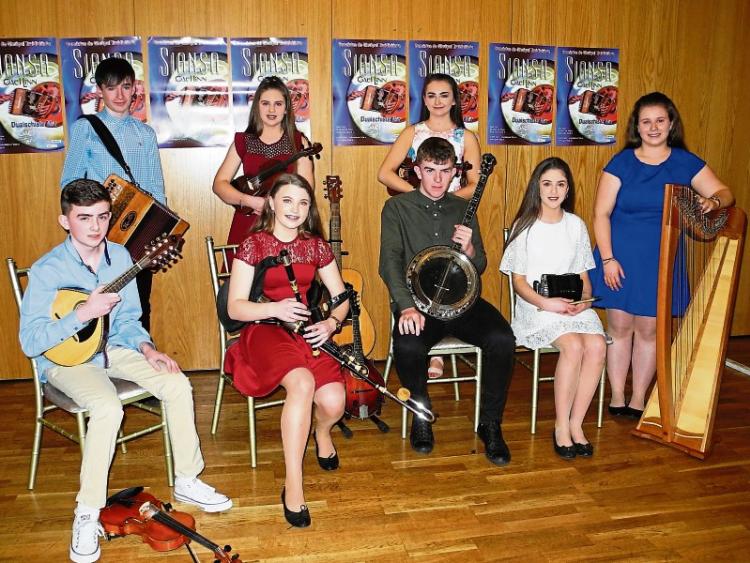 The Borris-in- Ossory based group ‘Lonrach’ will be among the cream of young Irish traditional musical and singing talent who will take to the National Concert Hall stage on Sunday, 22 April next for the Siansa Gael Linn 2018 final.

This is the second year that ‘Lonrach’ have attained a place in the final, a great achievement for the young Laois musicians.

Mentored by Siobhán Buckley, the members of ‘Lonrach’, Conall Ó Cnáimhín, Leah Ní Mhurchú, Peadar Ó Beinéid, Fiadh Nic Ghiolla Phádraig, Aoife Ní Bhuachalla and Ellen, Meave and Daithí Scot, will perform in the National Concert Hall alongside seven other groups from counties Clare, Fermanagh, Galway, Limerick, Offaly, Wicklow and Wexford. On the night, each group will play their own ten to twelve minute selection of traditional music, arranged a new and innovative way, and must include an Irish song in their repertoire.

The concert will be broadcast live from the National Concert Hall on RTÉ Raidió na Gaeltachta on Sunday, 22 April at 7.30pm and will be compered by the station’s popular presenter, Áine Hensey.

Siansa uniquely showcases Irish music and Irish song by young musicians, all through the medium of Irish, and this is the climax of the competition which is organized annually by Gael Linn, with support from Irish Music Magazine and RTÉ Raidió na Gaeltachta.

With a generous prize fund of €4,500, there is no doubt but that there will be a high standard of music and fierce competition at the event.