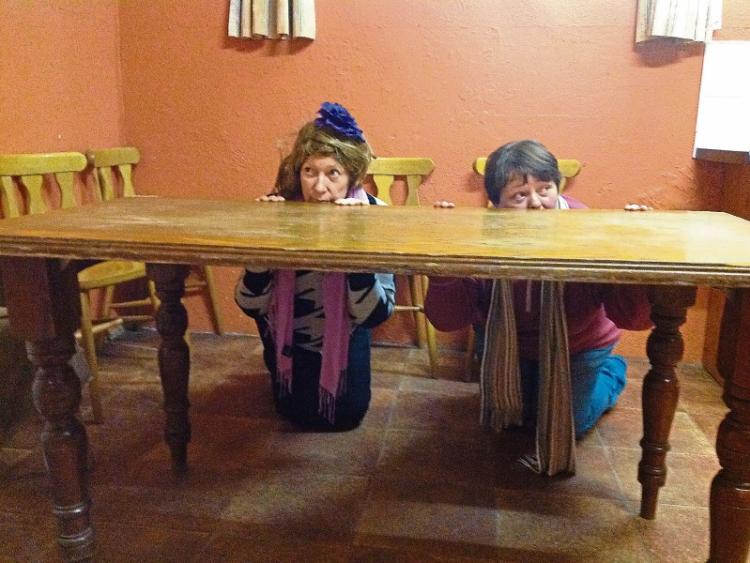 'It was a Dark and Stormy Night' is a mystery comedy spoof (bordering on farce) written by Tim Kelly reputedly America’s most publicised playwright. This “shameless spoof” won the Robert J Pickering Award for playwright excellence.

The spooky play is set in the 'Ye Olde Wayside Inn' home of the kooky Saltmarsh family and haunted by the ghost of a revolutionary war soldier.

In this spooky comedy you will visit the 'Ye Olde Wayside Inn' off the coast of Massachusetts. In this Inn you will meet a most unusual family; cousins Hepzibab and Arabella who were once residents of the local charity 'hospital', uncle Silas who is known as the oldest living maniac in Massachusetts, and of course, Ebenezer who is the insane member of the family.

The family has a strange hired girl, Olive, and also another member called 'The General'. Foul weather forces a hardnosed detective, some young nurses, taxi driver , a state trooper and a key witness to a murder and an odd salesperson to take shelter. Thunderstorms bring out the best and worst in this unusual family and give guests and visitors a night to remember.

Halloween fun with laughs, thrills and a few scary moments, guarantee an exciting and enjoyable night’s entertainment for all the family.

Bringing this wonderful unique piece of dramatic writing to life are many experienced actors who have been the backbone of Laois Open Door Theatre down the years, always willing to take on adventurous and challenging scripts.

As we all know nothing in life remains the same so new faces and youthful vitality and enthusiasm are always welcome in the group and this year is no exception with many new faces taking to the stage, some with experience and some their first time to thread the boards

The play is directed by Anne Campell, Eadaoin O’Connell and Edel Finnegan who are no strangers to the stage winning many acting awards over the years.

This year’s production is dedicated to the memory of John Campell who so sadly passed away some weeks ago. John was very loyal and long standing member of Laois Open Door Theatre and he is greatly missed by all.

So come and see this production to find out all the mystery and goings on in the Olde Wayside Inn and our production of Tim Kelly’s 'It was a Dark and Stormy Night' in the Dunamaise Arts Centre on Friday, April 27, at 8pm.

This play is sure to delight all those who love their mystery with a twist and a giggle.

Laois open Door looks forward to your continued support and guarantee you an excellent night’s entertainment.

Also in the Manor Hotel, Abbeyleix on Thursday 19th April at 8pm.

Set design and construction is by Brian Nolan and Dan Hooban. The Stage Manager is Dan Hooban - accomplished in all aspects of stage work. Nothing left to chance with Dan and of course the stage crew both backstage and front of house all who are essential and all who contribute time and energy to the production.

Paul Downey is in charge of sound while lighting is in the capable hands of Brian Nolan. Continuity by Rosemary Kearns.