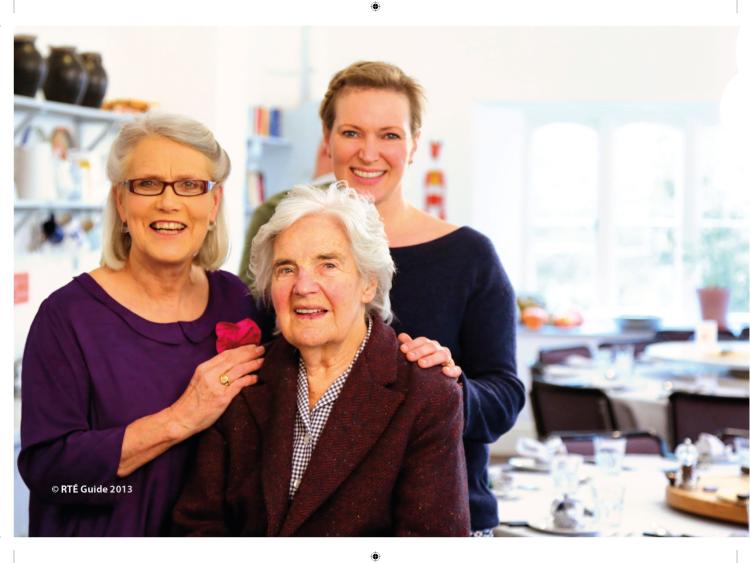 Laois chefs and siblings Darina Allen and Rory O'Connell will to feature in a TV tribute to famous Ballymaloe founder the late Myrtle Allen.

Myrtle was one of Ireland’s most culturally significant figures of the past 50 years. She has had a profound influence on what we eat, how we eat and on how Irish food and Irish cuisine are perceived at home and internationally. Countless numbers of chefs, cooks and producers started their careers at Ballymaloe.

These include her daughter in-law-Darina and her brother Rory O'Connell who hail from Cullohill. They have both been instrumental in building Ballymaloe into Ireland's best known cullinary businesses.

When Myrtle opened the restaurant at Ballymaloe in 1964, the food served in Irish restaurants was universally regarded as terrible. The top Irish restaurants, usually in Dublin hotels, served a second-rate attempt at French cuisine.

Much of this is down to Myrtle who, unknowingly, started a revolution when she opened Ballymaloe in 1964.

Myrtle Hill’s father, grandfather and great grandfather were all well-known architects in Cork and it was something of a disappointment to her father that his second child was a girl, and thus unlikely to become an architect.  She was educated at Frencham Heights in England, a co-ed ‘progressive’ school but when the second world war broke out she went to Newtown, a Quaker boarding school in Waterford.

While still at school, Myrtle met Ivan Allen at a dinner party at Ballymaloe – both Myrtle and Ivan were friends of the then owners, the Simpsons.  The romance blossomed and they married in 1943.

Ballymaloe’s owner at the time had inherited the house, but only after a succession of maiden aunts and every time one died, large death duties were paid on the estate.  By the time Mr. Simpson inherited the house and farm, there was no capital left and he had no option but to sell it.  Just before the auction, the Government increased stamp duty to 25% and so, while the auction was well attended, no bids were made.  Shortly after the auction, Ivan Allen put in an offer, which was accepted and in 1947, Ivan and Myrtle Allen moved into Ballymaloe.

Ivan farmed, Myrtle raised six children and wrote about food and cooking for the Irish Farmers Journal. Faced with a large, empty house with the children away at boarding school, Myrtle opened Ballymaloe House in 1964, first as a restaurant and then later as a hotel.

Right from the start, Myrtle was a champion of using local, seasonal food which, at the time, was a radical departure from the norm. She not only used local artisan produce, she credited the producers on her menus – again, something which is quite common now but utterly unknown in the mid 1960s.

The food writer John McKenna describes the opening of Ballymaloe as the Big Bang of Irish food – the moment when everything changed, the start of Ireland’s transformation from a place where bad food was the norm to a place where excellent food is widely available and appreciated.

This documentary is both a tribute to a hugely important figure in Ireland’s cultural life and an examination of the influence she has had on generations of chefs, artisan producers, hoteliers and restaurateurs.

The documentary is written, produced and directed by David Hare of InProductionTV whose career in food began, like so many others, at Ballymaloe.  While on a short course there he met Rachel Allen and went on to produce Rachel’s first four series, before selling the series to the BBC and the PBS network in the US.

David also produces Clodagh McKenna’s, Donal Skehan’s and Neven Maguire’s series’ which have been sold to five continents, making them not only some of Ireland’s most successful television exports, but also important promoters of Irish food overseas.

This one off documentary, which was originally broadcast in September 2013, gives a fascinating insight into the life of the late Myrtle Allen, who died earlier this month.