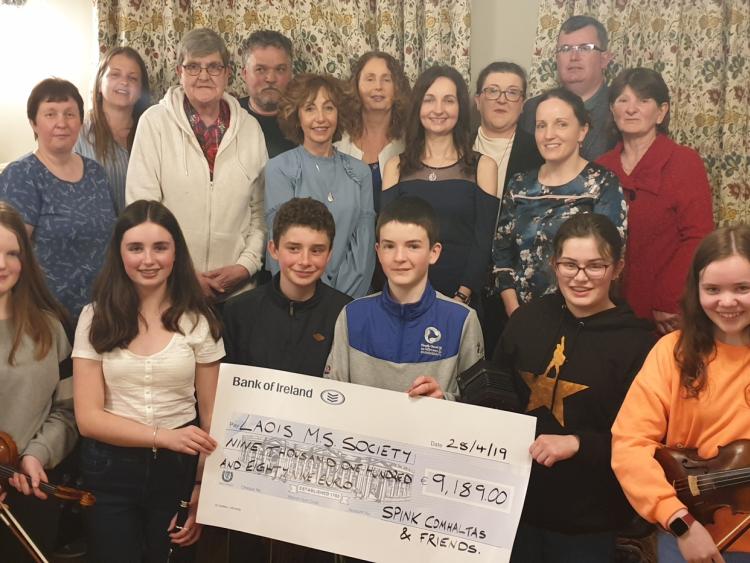 Presentation of the cheque to MS Laois from Spink Comhaltas and Friends.

One of the largest in-door music concerts in Laois this year was hosted by Spink Comhaltas on March 30 in the Manor Hotel Abbeyleix.

Some of the best of traditional Irish musicians in Laois along with Abbeyleix & Ballyroan choir entertained a capacity audience of 500 people and all funds raised went to MS Laois.

The concert was a memorial concert for the late Tom Bonham. Tom passed away in March 2018 after living with MS for a number of years whilst showing great courage and dignity and having tremendous family support. With the permission of the Bonham family, the concert was an opportunity to pay tribute to Tom as well as an opportunity to raise much needed funds for the good work that MS Laois do.

The hard work and preparation that went into the concert was well worth it. Thanks to the sell-out performance, sponsorship, donations as well as a raffle, a total of € 9,189 was raised for MS Laois.

Speaking on behalf of her family, Anita Bonham extended sincere thanks to all of the performers as well as the organising committee for taking the initiative to make this concert happen, and for all the hard work and professionalism that went into it. She noted that she was truly thankful to everyone involved and that Tom himself would have enjoyed the performance but would have been humbled by the level of respect dedicated to him. She said that MS is a difficult condition and in addition to family support, organisations like MS Laois provide tremendous support to help people live with the condition.

Accepting the cheque, Mary Madden, chairperson of MS Laois, congratulated the management committee of Spink Comhaltas for their initiative and hard work and expressed her gratitude on behalf of MS Laois for the funds raised.

Speaking at the presentation, Lawrence Vesey, chairman of Spink Comhaltas, thanked everyone who made this concert possible – from the performers and music directors on the night, volunteers who assisted, generous sponsors of prizes, the Manor Hotel, as well as the huge audience who attended. In particular, he thanked the voluntary management committee for their drive and imagination to organise the concert. Spink Comhaltas have been delighted with the feedback after the concert.

Spink Comhaltas are getting ready for their next projects and look forward to continuing to develop young musicians to the highest standards in traditional Irish music while maintaining a connection with their local community. More information on Spink Comhaltas is available on www.SpinkComhaltas.ie or on Facebook @SpinkComhaltas