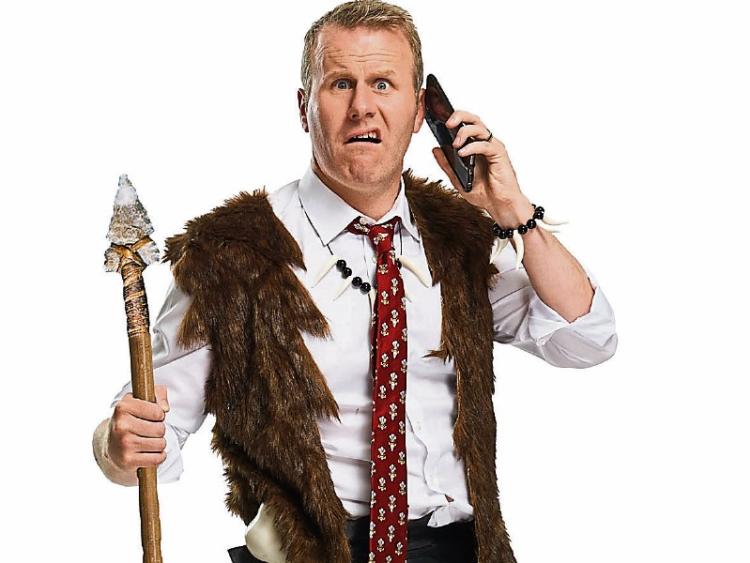 Have you ever wondered why men can't multitask, or why women can’t change a tyre? Wonder no more! Rob Becker’s Defending the Caveman, the longest running one-man show in Broadway history, visits Dunamaise Arts Centre this Friday to challenge and demystify the differences between the sexes.

Dubbed by reviewers as “hysterically funny” the Oliver Award winner for ‘Best Entertainment’ in 2000, Defending the Caveman has sold over 8 million tickets in 45 countries and has been translated into over 18 different languages. Defending the Caveman has won the hearts of millions across the globe and now it has its first ever Irish tour including his Portlaoise date.

Using psychology, sociology and plain old observational comedy, Defending the Caveman highlights the battle of the sexes – the stereotypical and yet, undisputedly true differences between men and women.

Why do men greet each other with insults? Why does it take women so long to get ready? Why can’t men talk about their feelings… And why does it seem that women can’t stop? Defending the Caveman has become a peacemaker and a celebration of the differences between the sexes.

Professional stand-up comedian, and one of the busiest Irish headline acts on the circuit, Tom O’Mahony brings his energetic and brilliantly funny persona to the stage to take the audience on a unique comedic journey that brings the house down with every performance.

Tom has starred alongside the legendary and late, great Rik Mayall as “Tarquin” in RTE’s Damo & Ivor, he has featured in the hit TV show Bridget & Eamon, was a regular on Republic of Telly, Irish Pictorial Weekly, 3e’s Uploaded-Uncut, Virgin Media's Six O’Clock Show and Irish Ghost Hunters.

Tom also regularly appears on national radio, 2FM’s Breakfast Republic and Newstalk. As well as playing every major comedy festival both here and abroad, he has supported for the likes of MTV's Tom Green, Mock the Week's Tom Stade, Jason Byrne and Tommy Tiernan.

Defending the Caveman will stage at the Dunamaise this Friday, October 25.