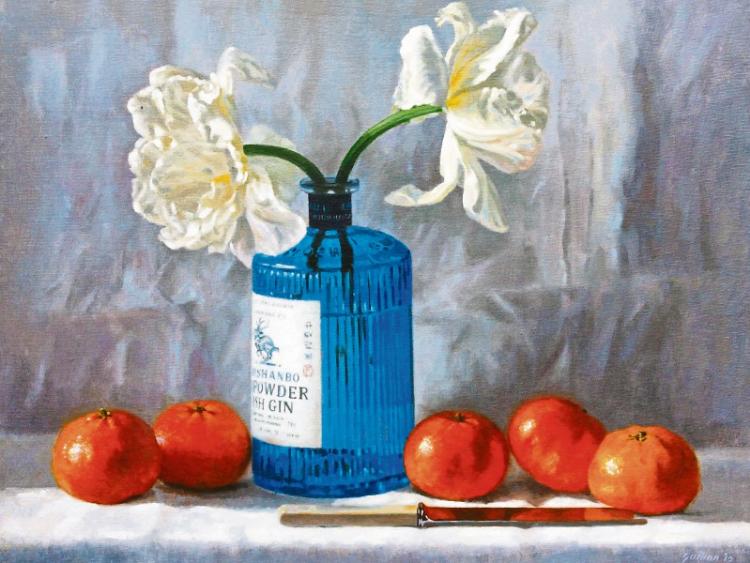 'Gunpowder Blues', one of the works which will feature in Gemma's exhibition

Award wining artist Gemma Guihan will hold an exhibition of her paintings for one night only in The Pantry, Portlaoise this week.

The painter and sculptor has received numerous distinctions, including the Abbey Stained Glass award from the Royal Hibernian Academy. Her work is held in the Presidential art collection, and in private collections throughout Europe, America and Australia.

Gemma is noted for her stunning oil paintings of pastoral scenes, from languid cattle in summer meadows and slumbering sheep, to her still-life paintings of blushing pink peony roses and white tulips imbued with sapphire blues.

Evening sunset on the river Barrow, soft pinks and greys of a seascape after a rain shower complement one of her largest works of an elegant Victorian house in Abbeyleix, Millbrook Hall.

Emo Court gardens dressed in autumnal hues, playful calves bounding in early morning fields, and silver glinting among oranges and lemons will be showcased on the night.

She has exhibited at the Royal Hibernian Academy and held numerous sold out shows at The Molesworth Gallery in Dublin.

Gemma is inspired by nature interacting with light that transforms the midland landscape into the extraordinary.

The exhibition is for one night only at the Pantry Cafe, Portlaoise this Thursday, November 28, at 8pm and all are welcome to attend.

The exhibition will be officially opened by Mark O’Neill, the British-born Irish painter best known for his realist depictions of still lifes, rustic landscapes, and lavish interiors.

His works can be characterized by dramatic lighting and visible brushwork, as seen in his painting The Young Gardener. Born in 1963 in Birkenhead, United Kingdom to Irish immigrants, he spent much of his childhood moving between South Africa, Nigeria, and Malta. He later settled in London where he received formal training from the Kingston College of Art.

After completing his education, O’Neill worked as a commercial illustrator for several British companies, including Harrods, Guinness, Southern Comfort, until moving back to his familial home in Ireland to focus on his own work. The artist first exhibited at the Forge Gallery in County Louth and has had several shows at Frederick Gallery in Dublin. O’Neill lives and works in Clonegal, Ireland.