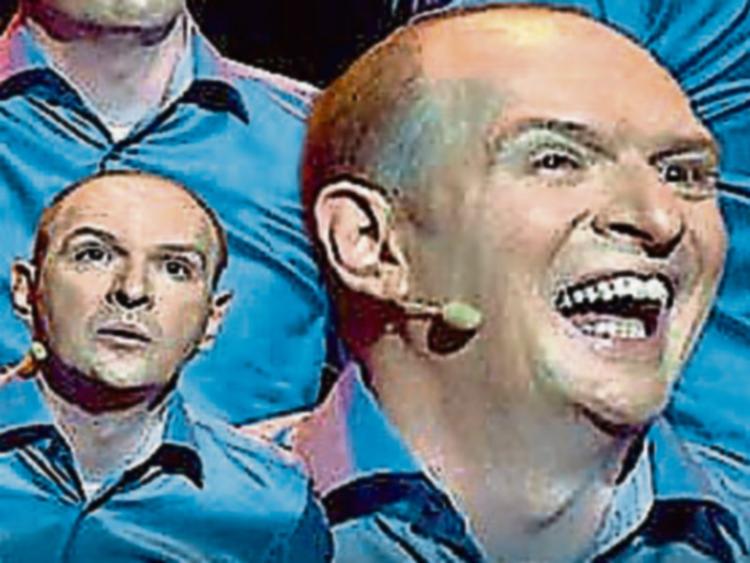 Laois comedian Ger Carey returns to the Dunamaise Arts Centre this month with his new show, The Vanishing Gun.

When Detective Jack O’Hara comes-to on the floor of a strange apartment, he discovers a nasty bump on his head, a dead body beside him and most surprisingly, that he has jumped forwards twenty years in time to 1975. When he is joined by Tex, a cowboy from the 1870s and Kulesh, an alien from the 31st Century, Jack realises that he has the mother of all cases to solve and time is running out.

Dunamaise Arts Centre is proud to support the premiere theatre production for general audiences by Portlaoise Native, Ger Carey. For many years the centre has welcomed Ger here with his stand up theatre shows for teenagers, presented to full houses of Transition Year students and their teachers, always to thunderous applause and roaring laughter, as he articulates the complexities and confusions of the teenage mind.

By secretly observing his subjects in their natural habitat, such as leaning on lampposts, in chippers, outside chippers, in shopping centres and sitting on any kind of steps, Ger has uncovered the weird and frightening world of the teenager.

“My route to comedy was a strange one,” explains Ger. “ I headed-off to England for a change of scenery. Once there, I worked in a series of dead end jobs, but then one day, out of the blue, I decided to become an actor. So I auditioned for a play at Bradford Playhouse. I was trying to perform it ‘straight’, but the people auditioning me were falling about laughing.

“Afterwards, the director ruefully informed me that, in his opinion, I would make a far better comedy actor and promptly gave me a bigger part in the play. It was a role written for a comic, and all I remember about it was my first big laugh. People laughing really is the most wonderful sound in the world,” he said.

This new comedy is ideal for parents and their pre-teens and teens to enjoy together, with an age rating of 10+.