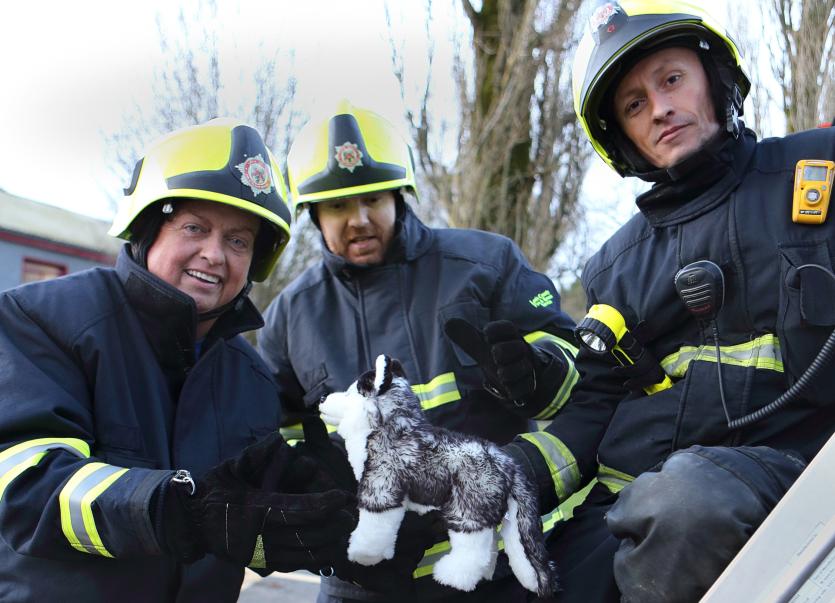 Laois native, comedian, radio presenter, actor and soon to be author Bernard O’Shea is showcasing his home town of Durrow to television screens in a new RTÉ series with Marty Morrissey this month.

'Marty and Bernard - On the Road Again' is a second series involving the pair doing mad things around Ireland. This time it is supporting good causes in the process, including the Durrow branch of the County Laois Fire and Rescue Service.
Bernard took time out to chat with the Leinster Express about the new show, his new book and life during the Covid-19 lockdown.

“The first series was just me and Marty acting the clowns, so not so much has changed. We’ve one thing in common, we get a lot of requests to do things, it’s lovely, it makes you think you’re of value to someone. The only thing is you can’t get to them all, there’s so many good causes,” Bernard said.

Below: Bernard O'Shea in stirring pose in Durrow Fire Station. 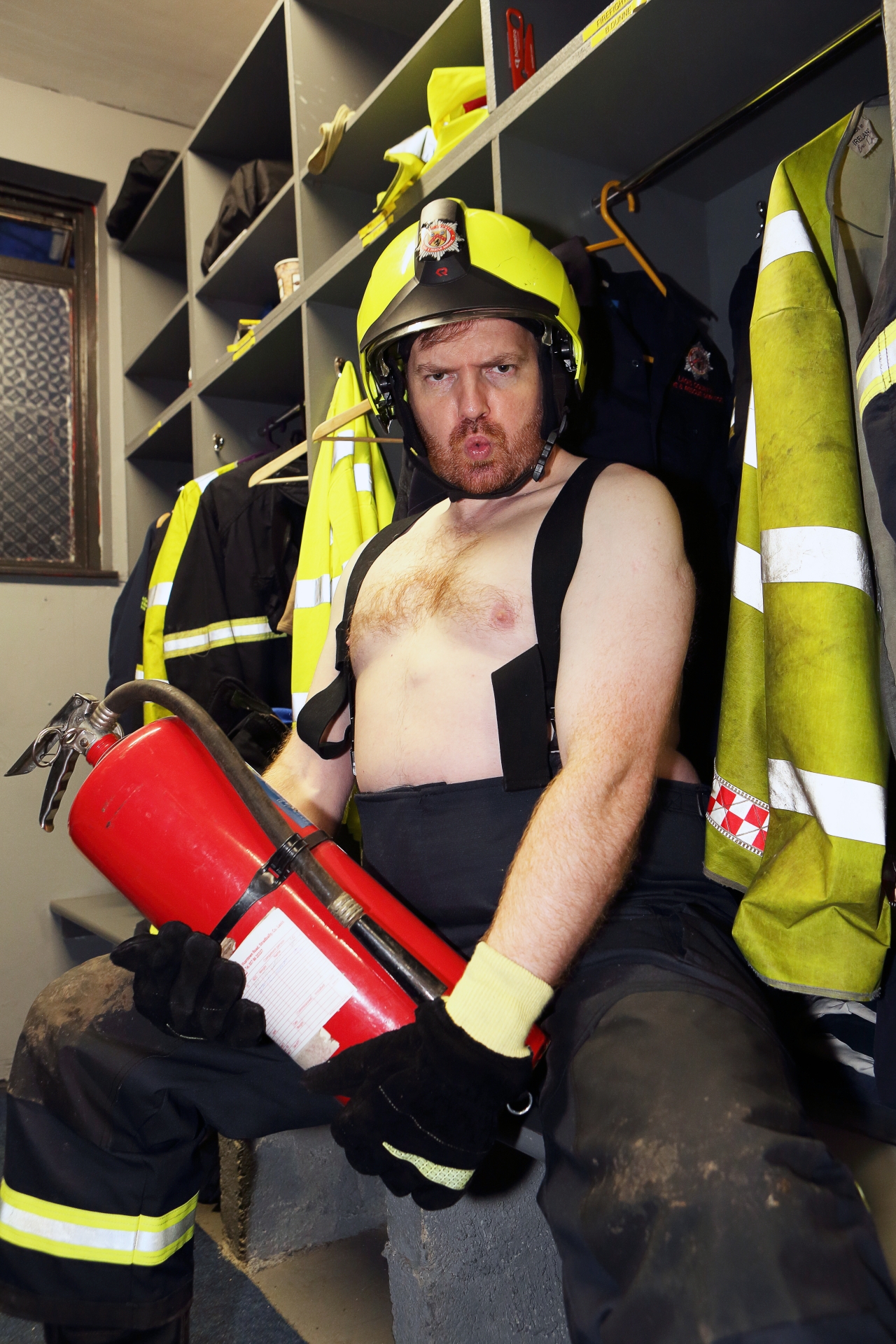 In each episode of the three-part series, the duo meet people from different communities who do remarkable things for their areas. They then set a challenge in order to fundraise for that group.

The first show on Wednesday, May 13 starred the Gaelic 4 Mothers & Others club in Dublin. The second last Wednesday, sees Marty bringing Bernard home to Co Clare to Kilrush to help the local RNLI lifeboat crew.

In the final episode this Wednesday, May 27 at 9.35pm Bernard brings Marty home to Durrow in Laois to help out the local village's fire service. 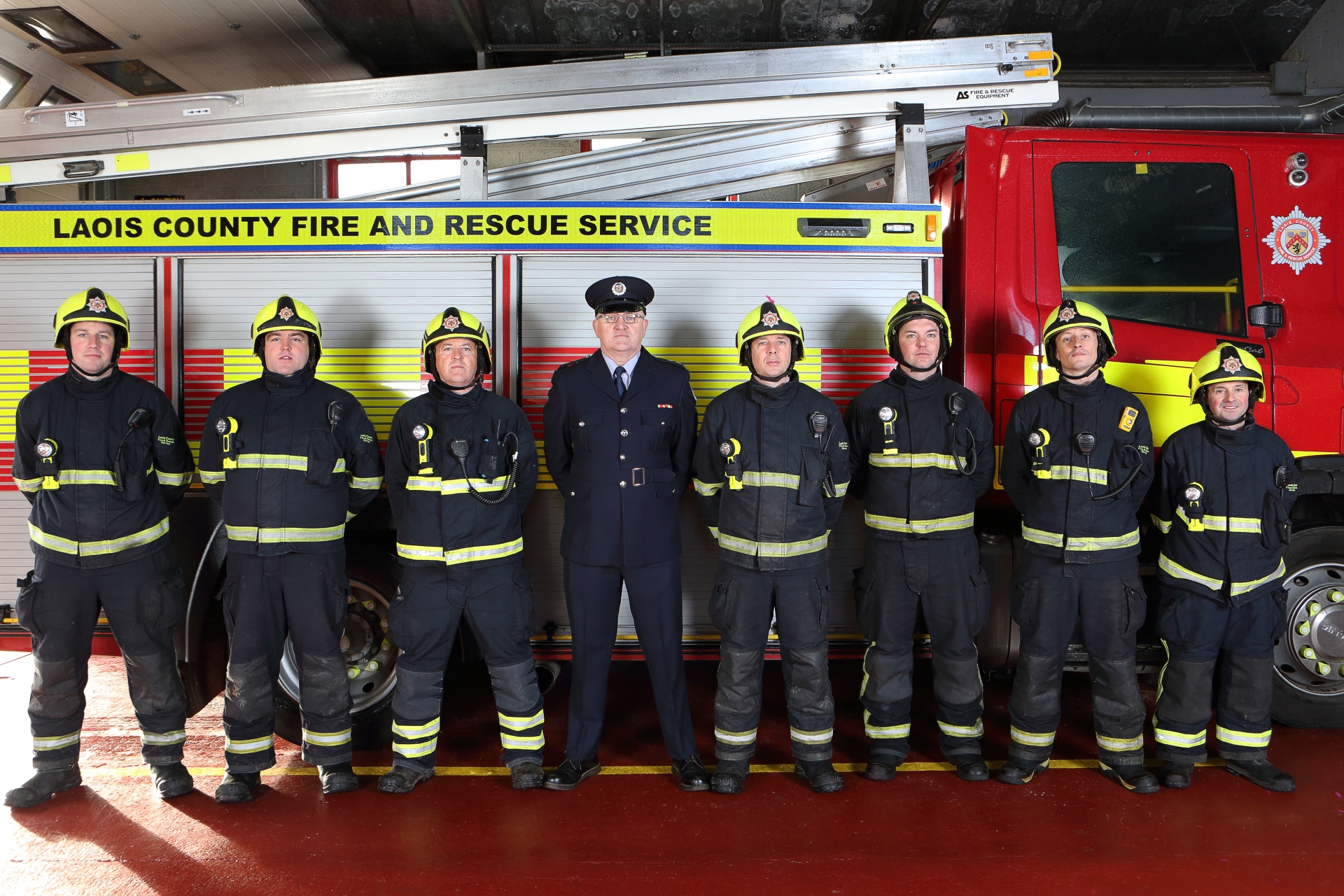 “I was at the Scarecrow Festival last year and I bumped into Robbie Dempsey and all the lads in the fire crew. I was chatting about it to my mother and she said 'you know they can’t go anywhere, they can’t leave, they’re on call 24 seven', I couldn't believe it,” he said.

Marty had found the same in chatting to the lifeboat volunteers. The GAA commentator was already a fan of GAA 4Mothers so their three causes were easy choices.

“I was delighted to come back to Durrow, my only problem when we did go back and film it I kind of fell back into being a 12-year-old kid, standing in a corner and say nothing, Marty and the director had to say ‘hello, wakey wakey’,”

“I always say to Marty that I had the worst upbringing for a comedian, because I had a great childhood,” Bernard said.
“Marty was amazed by Durrow, he kept saying ‘wow’, even the crew were amazed. It’s got that big open Georgian square and three or four restaurants. I’m immensely proud of it, particularly in terms of what the community does, with the forum, the Scarecrow Festival. There’s such a great community spirit,” he said.

A son of Mary and the late John O’Shea, Bernard attended the boys school and Our Lady’s Meadow NS.
“I had absolutely no idea what I wanted to be when I grew up. I had a great guidance counsellor in Heywood College, Freddie Tuite. I was going to go to Dun Laoghaire to do radio production but I was more interested in music and he gave me the prospectus for a new course in Dundalk on cultural studies. Even after that four years I still didn’t know really what I wanted to do.

“I was playing music, my dad played trad music around Laois and Kilkenny, and I played guitar in pubs around Dublin. I started to do a bit of stand-up in college, it was only a few years after that stand-up took off. I still don’t really know what I want to be,” he said.

So how has the Covid-19 lockdown experience been for the comedian?  Well thankfully, his mother is coping well during the restrictions.

“She is a wizard on the iPhone, like a lot of parents she’s never had as many phone calls, probably more than she wants. She is doing very well, she still does her few bits, it’s a different pace. We are very lucky she is healthy. My sister Marian lives in Durrow and checks in on her,” he said.

His children are Olivia, 6, Tadgh, 4, and Sean, 1.  Working from home during the restrictions is “a bit mental”, particularly as he is writing a book.

“My wife Lorna works so we split the day, I do from 5.30am until 1pm, then I work from 1 to 6 or 7pm, and then my wife takes up the two small ones and I’m left with the fella who doesn’t sleep. I try to get to bed with him around 8.30pm.
“It is difficult, I had a lot of projects on the go and a lot didn’t stop with Covid. I’m not able to go into my office in the city, and childcare is not open until September,” he said.

The book The Manopause is due out in October. It is about Bernard’s search for happiness after hitting his “mid-life crisis”.

“Oh yes, I’ve most definitely hit it. I’m 41. Someone pointed out to me that the average man dies at 82. Basically I got to 40 and I wasn’t happy, with anything. I decided to explore this idea of happiness, this mindfulness culture, not realising I desperately needed it,” he said.

He tried lots of methods solo.
“I thought mindfulness was just naff, sitting in a room for an hour bored out of your mind. The whole health and fitness thing I struggled with for years. I was a skinny teenager and I put on weight in my 20s and 30s, I’d lose a bit, put it back on, so I wanted to do all the mental stuff, the ‘lose three stone in two weeks’ kind of thing.

“Eventually I got to 41, realised that none of this is working, so I brought in the experts then. So three quarters of it is a f*cking eejit guide to self improvement, and a quarter is ‘oh here’s a plan that anybody could maybe do’.”

Bernard also has a new television series in the works which was put on hold during Covid-19.
“It is called Funny Business. Basically I was working with the Gardaí in Portlaoise, with Iarnród Éireann and the Irish army. Working is a strong word. I’d try and get two or three guards and train them to do stand-up, the same in Iarnród Éireann and I was going to the Lebanon but a week before they cancelled it which was lucky because two days later they went into complete lockdown.

“Hopefully I will be back making that in September and we will have it done by November,” he said.

Stand-up touring has taken a back seat.
“I always say it's your basic trade but over the years I had full time radio or television so I couldn’t do it. I was going to do a tour next spring but I’m not going to get a chance to test the material. Then I was asked to do a show based on the book but I’d like the book to breathe a while on the shelves. I’ll definitely tour some time next year,” he said.

Bernard enjoys having many strings to his bow.
“It keeps it interesting but it keeps you having a livelihood as well. Ireland is too small just to be a stand-up for most of us. Unless you’re doing other things it’s very difficult to make a living.

“The writing is a new thing. I’m learning how to do that. It is very different because there is no-one answering back only myself. I would like to get into fiction in the next few years.

“I love going home (to Durrow). It’s only down the road. The kids love it as well. There’s a donkey in the field and they love that. The motorway was the biggest change in Laois for me. When I went to college in Dundalk in 1996 it was four hours on the bus. Now on a Sunday I can pop down for a few hours and go home,” he said.

The O'Shea family live between Blanchardstown and Castleknock but would he ever move home?

“The pros of a city are that are you are near everything, the services and hospitals. The cons for kids is they don’t have the same freedom, the space to run around. I’d love to live in Laois, some day, you never know,” Bernard said. 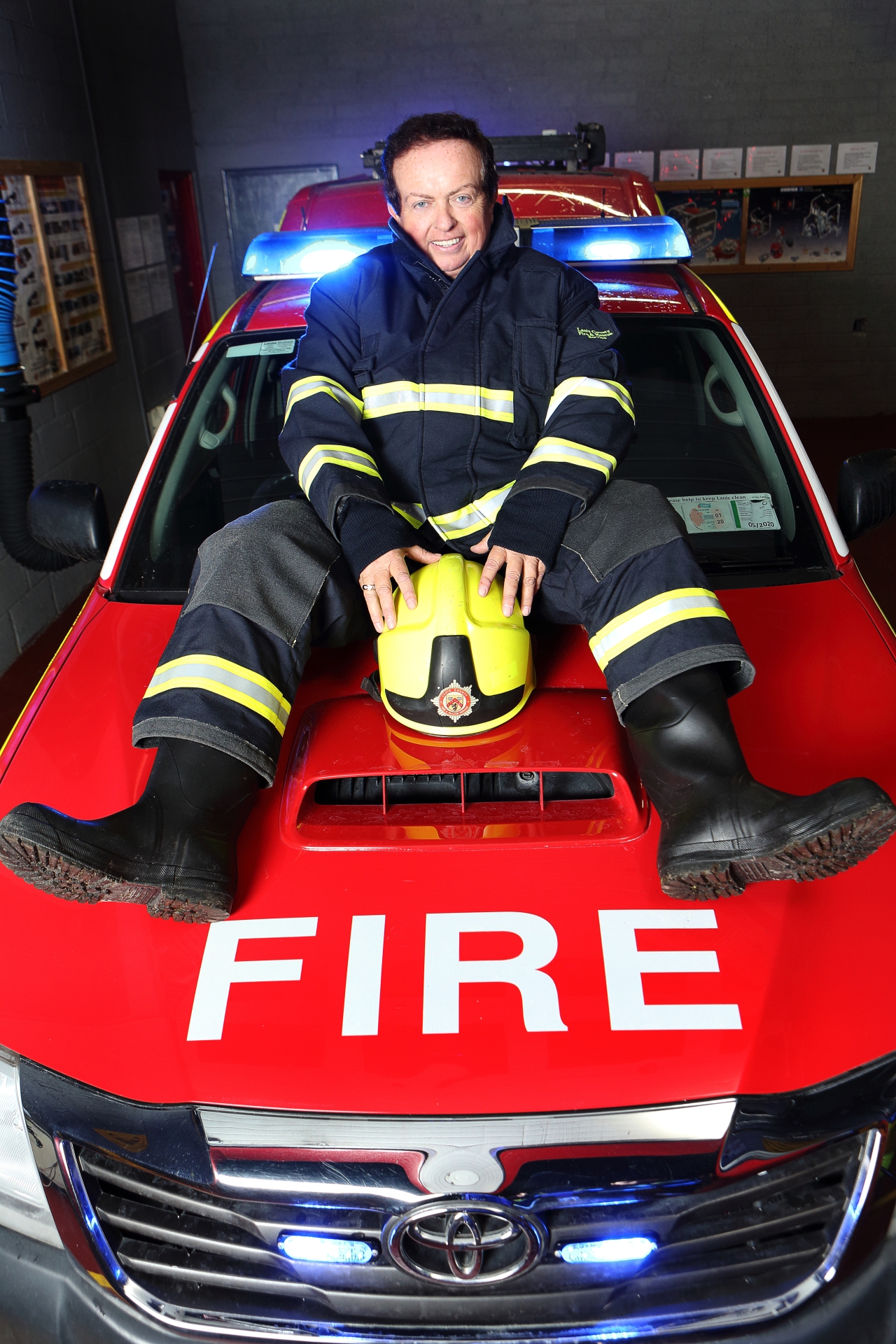