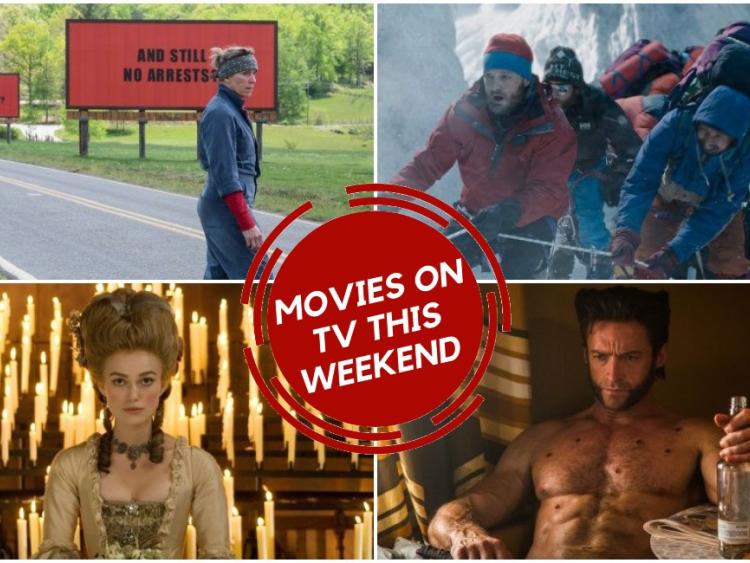 Agent Ari Ben-Sion is tasked with a mission from Mossad to smuggle a chemical-weapons scientist out of Syria. However, when the assignment goes wrong, Ben-Sion realises that he's a pawn in a much bigger scheme. Director Daniel Zelik Berk's thriller, starring Jonathan Rhys Meyers, Olivia Thirlby, John Hurt and Jürgen Prochnow

A couple who have finally rid themselves of the college fraternity next door become stuck with even worse new neighbours in the shape of a raucous college sorority. In desperation, they turn to their old enemies in getting rid of the new arrivals. Comedy, starring Seth Rogen, Zac Efron, Rose Byrne and Chloe Grace Moretz.

A group of college friends reunite for a trip to the forest, but encounter a menacing presence in the woods that is stalking them. Horror, starring Rafe Spall and Arsher Ali

Grieving mother Mildred Hayes has suffered an unimaginable personal loss, and hatches an idea that drags the residents of Ebbing, Missouri into a maelstrom of revenge. She pressures Sheriff Bill Willoughby and his forces into continuing the investigation into her daughter's murder. It becomes an obsession that has dramatic repercussions for all of the locals. Martin McDonagh's Bafta and Oscar-winning crime drama, starring Frances McDormand, Sam Rockwell and Woody Harrelson

An oil rig in the Gulf of Mexico is beset by technical difficulties - but executives from the company behind the project ignore the signs and demand work proceeds as normal, despite warnings from key engineers on site. The situation rapidly gets out of control, leading to the worst environmental disaster in US history. Fact-based drama, starring Mark Wahlberg, Kurt Russell and John Malkovich

Two expeditions set out to climb to the summit of the world's highest mountain. Both parties of mountaineers get caught in one of the fiercest snowstorms ever recorded, and face a desperate struggle to survive against the elements. Fact-based adventure, starring Jason Clarke, Josh Brolin, Jake Gyllenhaal and Keira Knightley

Fact-based period drama, chronicling the life of Georgiana Spencer who became Duchess of Devonshire in 1774 at the age of 17. Adored by the public for her extravagant lifestyle, Spencer endured a troubled marriage and was eventually driven into the arms of Charles Grey, a senior Whig politician. Starring Keira Knightley, Ralph Fiennes, Dominic Cooper and Charlotte Rampling

Divorcee Toby Howard and his ex-con older brother Tanner embark on a meticulously-planned crime spree, hoping to rob every branch of the West Texas bank that has threatened to foreclose on their family ranch. However, they soon find themselves being pursued by two veteran Texas Rangers. Neo-western drama, starring Jeff Bridges, Chris Pine and Ben Foster

A washed-up pop idol is given the chance to write a song for a teenage star - but despite his musical talents, he has never written a lyric in his life. However, the discovery that the woman who looks after his plants has a way with words marks the start of a beautiful relationship. Romantic comedy, starring Hugh Grant, Drew Barrymore, Brad Garret and Kristen Johnston

In a future ravaged by war, the superhero team makes a desperate last stand against a force of deadly robots. Their only hope is to send Wolverine back in time to the 1970s, to join forces with an earlier version of the X-Men and change the events that started the conflict. Superhero adventure sequel uniting the casts of the original movie and prequel First Class, starring Hugh Jackman, Jennifer Lawrence, James McAvoy and Michael Fassbender

Two friends wake up with the realisation they have absolutely no memory of the events of the night before. They set about retracing their steps - only to stumble across a host of crazy characters, a flock of marauding ostriches and a fanatical alien-worshipping cult. Comedy, starring Seann William Scott, Ashton Kutcher, Jennifer Garner and Kristy Swanson