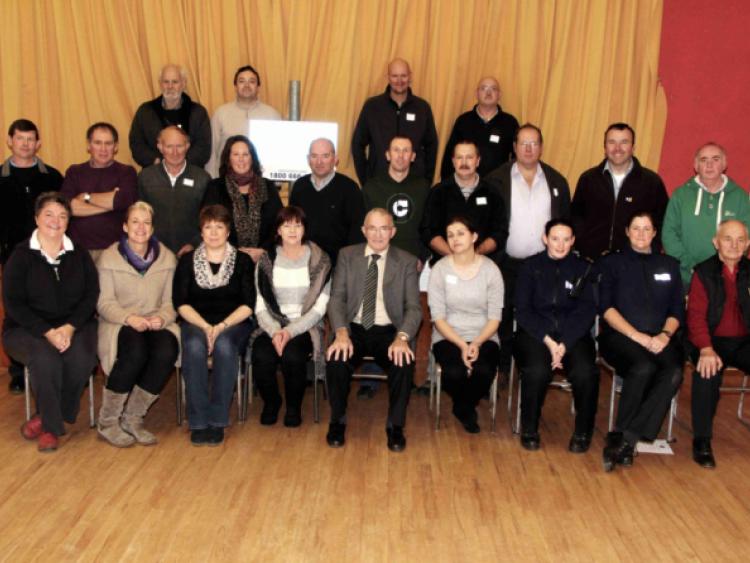 Having formed last April, the group has already installed 28 panic alerts in the homes of elderly people.

Nearly 30 Community Alert signs have also gone up in the area, working in partnership with the Gardaí and Muintir na Tíre.

Members went door-to- door to advise residents on security measures, and fundraised €3,000 to cover costs. They received a government grant of €500.

Chairperson Harry Wynne said they formed because of growing concerns about crime. We found a lot of recent crime was targeting older and vulnerable people living alone in our village.

“We approached Sergeant Justine Reilly in Portlaoise and Mr Conor O’Leary from Muintir Na Tire to enquire about setting up a Community Alert Group in the area,” he said.

Vice-chairman Martin Bergin says the scheme is about vigilance.

“It does not mean asking anyone to take personal risks to prevent crime; it is about working in partnership with the Gardai by reporting suspicious activity in the area.” he said.

A quarterly bulletin updates residents with crime prevention tips and local updates. They have a number of additional initiatives in the pipeline including the text alert scheme and the ‘message in a bottle’ scheme, and are considering CCTV.

“This has been such a community effort, it is amazing the spirit, everybody is looking out for everybody else. We have been successful in getting the message through to keep doors locked all the time, and if answering the front door, make sure the back door is locked,” said secretary Siobhan Kelly.