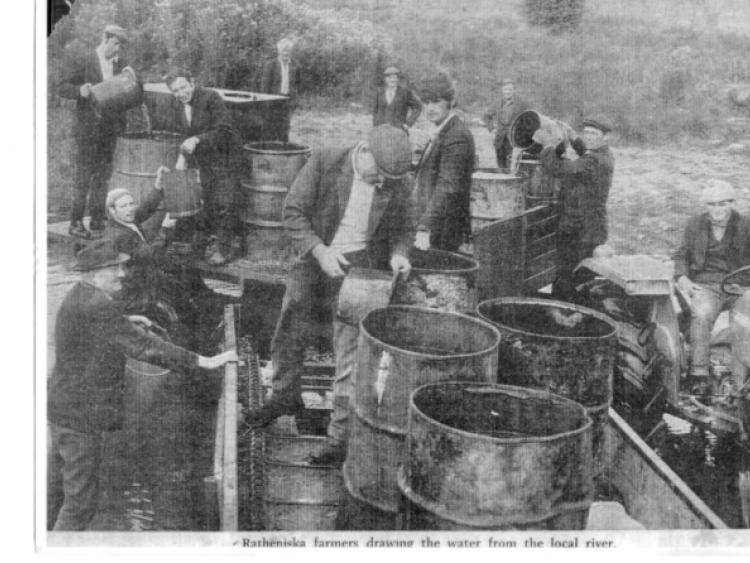 The people of Ratheniska were in mourning recently with the news of the death of Pat Drennan.

The people of Ratheniska were in mourning recently with the news of the death of Pat Drennan.

Pat or Pad as he was affectionately known to those close to him, was a hugely popular member of the community, immersed in his surroundings through his involvement in a number of local organisations. In fact you might say that, through his work in the Ratheniska Water Group in the late 60’s and 70’s, Pat’s influence has been flowing through the community for the best part of 5 decades.

When a fresh water spring was discovered on Joe O’Connor’s land in Kyle back in 1968, the locals sprung into action. Pat was appointed Chairman of the Ratheniska Water Group and took on the task of driving forward the initiative to deliver water to every home in the area. Prior to his intervention, the locals of Ratheniska drew all their water supply from the nearby Timogue River, a painstaking process on a good day, and this discovery would prove to be a landmark moment in the community’s history. When invited to view the spring, Laois Council engineers were astonished not only with the discovery, but the ambitious plans Pat and his committee of locals had to harness and develop it.

Through Pat’s stewardship and determination, the group engineered and steered the Scheme to its triumphant delivery in 1976, an immensely proud day for Pat and his group of pioneers. All in all to get the scheme to that point cost a total of £54,000, £19,000 of which was raised by the users themselves, quite a significant figure at the time.

So successful was the scheme that it not only saw water delivered to the homes of the Ratheniska people, but Park, Grange, Dysart, Dunamaise, Timahoe and further afield all benefitted from the initiative of the Ratheniska Water Group. The scheme continues to this very day, in fact it was only a few short weeks ago that Pat oversaw the handing over of the Scheme to the newly founded Irish Water. The new organisation has a hard act to follow.

Pat’s next project would also revolve around water when in 1977 he went about resurrecting the Portlaoise swimming Pool, which had been idle for over 2 years at the time. Chairing a committee which included Fr Jim O’Connell and Willie Aird, Pat masterminded the reopening of the Pool and would oversee its running for the best part of 30 years. During this time Pat, in his voluntary capacity, was on site practically every day to ensure the smooth running of the amenity, becoming a self-educated expert on every facet of the facility, from swimming instructors to the running of the pump room and pool engineering. He continued in some role or other with the Pool up until its handover to the Laois Council in recent years, with his service being recognized by the unveiling of a plaque in the new building.

A livestock farmer by trade, Pat was well known in the farming community of Laois through his involvement with the Irish Farmers Association. A founding member of the Ratheniska IFA, he acted as Treasurer of Laois IFA for a number of years. He was also heavily involved in the Donaghmore Co-Op which would go onto become part of Glanbia.

A keen lover of sport, GAA was Pat’s first love and his exploits on the playing fields of Laois with his beloved Park/Ratheniska brought smiles to the sad faces of his teammates when they came together to provide him with a guard of honour for his final short journey to the nearby Ratheniska cemetery. A member of the first ever Ratheniska side to win Hurling silverware back in 1958, Pat was remembered fondly as a no nonsense corner back who gave many years to the green and gold jersey. A keen supporter of Laois County teams, his face was a familiar one at county grounds up and down the country.

The beloved husband of Peggy, herself an incredibly active member of the local community also, and much loved father of Caroline, Pat will be deeply regretted by his loving family, son in law Tom (O’Donnell), grandchildren Jim and Tom, sisters Eileen, Pauline (RIP) and Chris, brothers in law, sister in law, nieces, nephews, relatives and friends.