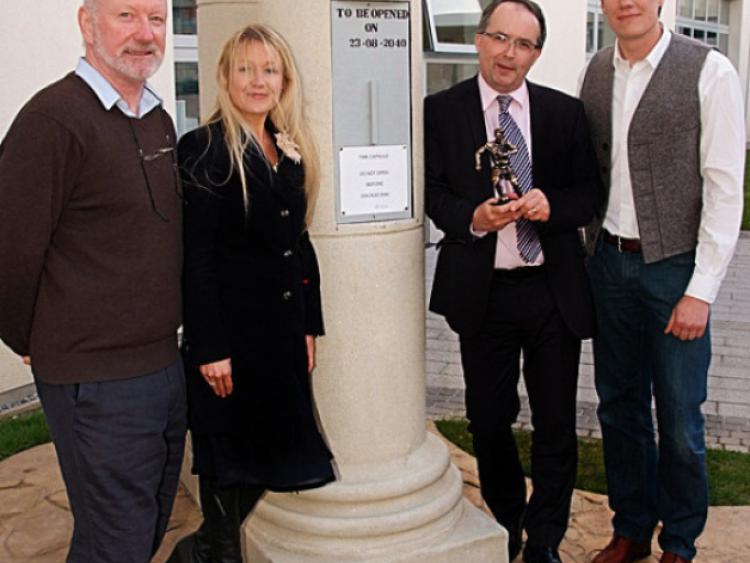 STAFF and students from St Mary’s CBS in Portlaoise recently completed a time capsule which will be opened in 50 years in 2063.

STAFF and students from St Mary’s CBS in Portlaoise recently completed a time capsule which will be opened in 50 years in 2063.

Poet and past pupil Pat Boran created a poem that is engraved on the arch where the time casule is installed. The time capsule contarins 30 items including a letter and WSE report from the principal, a letter from Dick Quinnilan (deputy principal) on his retirement, signitures and photo of all staff including ancillary, the school brochure, Tower Hill and Borris Road Year books, class lists of entire school, a school diary, a percent for art booklet, a football and hurling jersey, stories from ‘Life in 2063’ competition entries, awards nights booklets and a two euro coin and a list of what it might buy.

Other items include aHistory higher level paper signed by the Leaving Cert class, Accountacy and Irish papers, notices from the staff board, a magnet from the Science lab, white oak reclaimed from a school desk in St Paul’s, rosary beads, a graphite pencil from the Art room, a basketball medal, a careers questionnaire, a copy of the Leinster Express (from May 14), a copy of the Irish Independent (May 14), a letter from Catherine Whelan (office), a payslip from Mary Murphy, a school jumper, an article on environment and CO2 levels, an invitation to the TY night, and a key of the street entrance door to Tower Hill.

The time casule will be opened on August 23 2040 to coincide with the 30th anniversary of St Mary’s CBS moving to the Borris Road. It is hoped that the school’s present first years might be invited back by their children for that event. The CBS has had a presence in Portlaoise since 1847 and the old school building was on Tower Hill, before the school moved to its new campus.

Roads are not drains for farmers insists Laois council