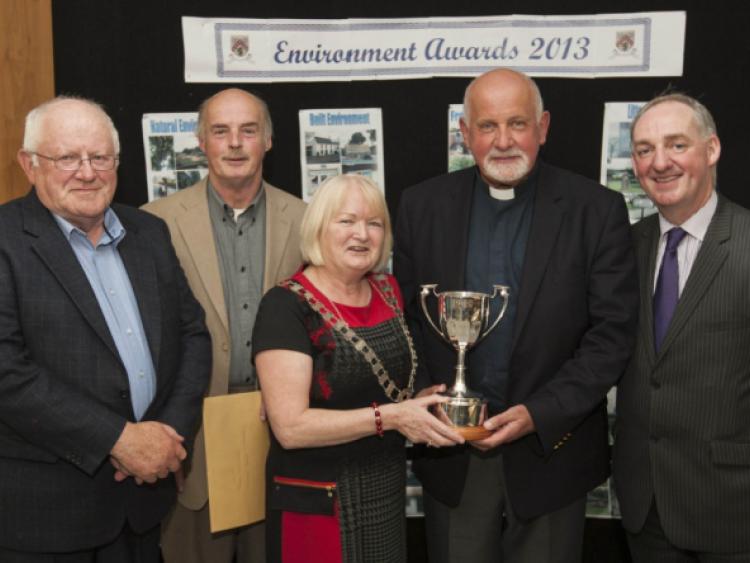 Borris-Kilcotton might have fallen just short in the hurling but Borris-in-Ossory made it a four in a row in the fight against litter recently.

Borris-Kilcotton might have fallen just short in the hurling but Borris-in-Ossory made it a four in a row in the fight against litter recently.

The 32 groups registered with the Laois Federation of Tidy Towns were cordially invited to attend the Environment Awards evening on Wednesday the 11th September 2013 in Áras an Chontae, Portlaoise.

The evening was held to celebrate the participation and achievements of the groups in the Laois Federation of Tidy Towns Competition and the Inter Community Litter Challenge.

Borris-in-Ossory was one of the big winners on the night with the village taking first place in the Inter Community Challenge.

Laois County Council Cathaoirleach, Mary Sweeney welcomed the groups and commended them on their invaluable contribution to the towns and villages of Laois. She noted the tireless voluntary work carried out to make Laois a nicer place to live, work and visit.

Noreen Byrne, Chair of the Laois Federation of Tidy Towns congratulated all her federation colleagues on another successful year at both local and national level.

County Manager, Peter Carey acknowledged the groups and thanked them for their continued involvement. He went on to commend them also on their performance at National level and noted the year on year improvement in marks for the groups and success in the competition.