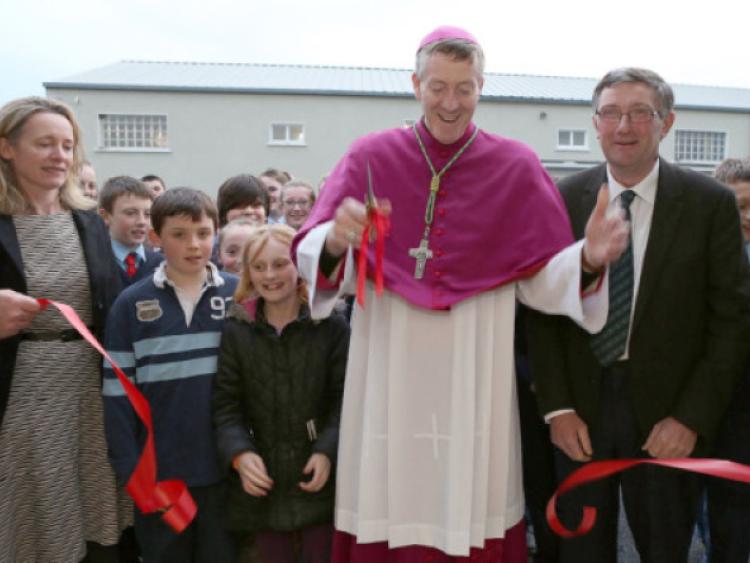 Over a century since it first opened, Ballyfin National School has been restored and reinvented as an innovative special needs ability centre for the county.

Over a century since it first opened, Ballyfin National School has been restored and reinvented as an innovative special needs ability centre for the county.

Last Friday June 6, Bishop Denis Nulty paid his first visit to Ballyfin when he came to bless and officially open the Old School.

In July the No Limits Ability Centre will begin to host summer activity camps there for people with special needs, and in September it will open full time, with more details yet to be announced.

“We will be working with the National Learning Network, Rehabcare and St Anne’s Roscrea to run the centre full time, focusing on play, movement, activities and abilities,” she said.

Michael Burke is chairman of Ballyfin Community Development Association, who got a heritage grant to carry out the project through Laois Partnership.

“Everybody is delighted it is back in good condition, and it will be put to good use. The voting was one of the first things to happen in the school after it was restored, and everybody got a good look around then,” he said.

The two classroom school first opened in 1902 with 119 pupils on the roll. By 2008, when the new Ballyfin NS opened next door, much of the children were being taught in dilapidated prefabs.

“They were using the meeting hall of the parish hall as a classroom too. The school was hard to heat, the windows were in bad repair, the prefabs could have been repaired but it was all just not big enough,” explained Michael.

After it closed, the association were almost successful in getting a grant from Laois Childcare to run an afterschool there, but the recession hit and that funding was withdrawn, with the building falling into further disrepair.

The renovation project overseen by architect Evelyn Duff, took nine months and €300,000 to complete, paid with the grant from Laois Partnership and with local fundraising.

A flat roof extension built in 1959 for toilets was removed, and a new wing built with a kitchen, staffroom, office and toilets.

The prefabs are also gone and new windows, electrics, insulation and a cosy stove have also been installed.

To volunteer or enquire further about the new centre, email nolimitsability@gmail.com or call her at 087 7497826