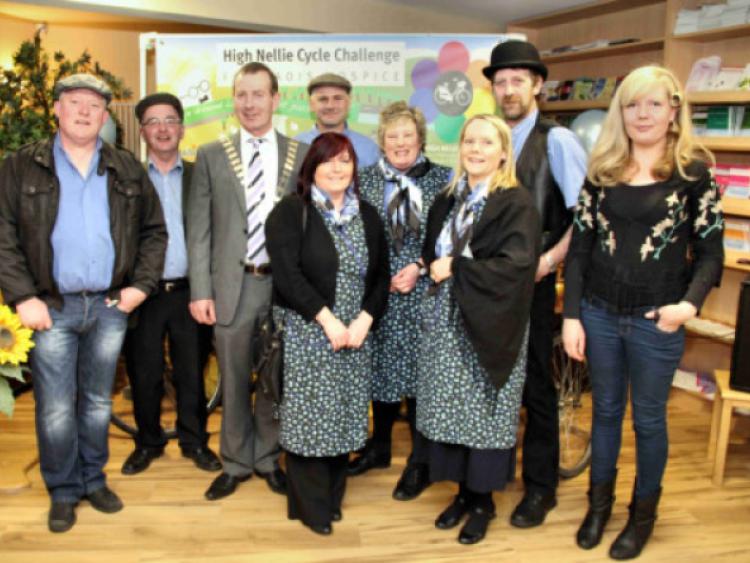 Youth Work Ireland Laois are currently looking for volunteer leaders to work in the Abbeyleix Youth Café. This is an exciting opportunity to work as volunteer in partnership with young people, volunteers and other stakeholders, to empower and enable young people in matters that shape their lives, communities and society at large.

Volunteer leader training and ongoing support will be provided. Those interested can contact Youth Work Ireland Laois project manager Joe Thompson at 057 86 65010 or by email at jthompson@ywilaois.ie. Joe will be able to discuss the the application process, roles and responsibilities, and any other queries.LATE MARIE O’KEEFFE

Condolences to the family of the late Marie O’Keeffe of Portlaoise Rd, Abbeyleix who passed away on Sunday, March 3. Reposing at her residence from with removal to the Church of The Most Holy Rosary, Abbeyleix, for requiem mass. Interment immediately afterwards in the adjoining cemetery.

The group present ‘It runs in the Family’, a comedy by Ray Cooney on Thursday March 21 at 8pm in Abbeyleix Manor Hotel. Proceeds to Laois branch of the Alzheimer’s Society and Raheen hall restoration. Tickets on the night €10 adults and concessions €7. No reserved seating. First in best seats. Enquiries to 057 87 30111 and 087 9614235.

Abbeyleix ICA will celebrate its centenary in 2014. They are currently in the process of drawing up plans to document their involvement in the many organisations down through the year. They were key players in The Abbeyleix Agricultural Show, Macra na Feirme and the Maytime Festival for many years. They are appealing to members who were involved in the organisations to support their proposed book publication. If have a story to tell or a photograph to share. Please contact Pat O’Halloran Alice Reilly, Mary Hearns or any member of Abbeyleix ICA

An exhibition takes place in Abbeyleix Library for the month of March showcasing these talented artists - Trudi Killeen a landscape, watercolour artist; Niav Riley, a millener, and architect Ciaran O’Brien. The exhibition is currently on display and all are welcome. To find out more, see this week’s Stage Left

The theme for this years National It runs from March 3 to March 10. It is organised by the tree Council of Ireland with the support of Coillte. Trees can be planted up to the end of March.

The AGM of Laois Federation of Tidy Towns took place on Wednesday March 6. The meeting was very well attended which showed the commitement and pride of place that community groups throughout Laois have in mainting their towns and villages to a very high standard. Clean Up-Laois will start in April and it will be part of An Taisce National Spring Clean which runs from April 1 April 30. We would encourage Residents Associations, clubs and schools to organise a clean-up in your area which would greatly assist the work of Tidy Towns committee Intercommunity litter challenge will be run again this year. The format will be the same as last year. Towns and villages entering the competition will be judged during the months of May and June. It was proposed that the Awards night should be reinstated as it was a great platform for tidy towns groups to network with one another. There was much discussion on illegal dumping and the extra work burden is places on already overstreched Tidy towns groups. The general consensus was the lack of enforcement of the law which need to be rectified. The meeting concluded with the election of officers. Chairperson Noreen Byrne, Vice Chair Chris Horan, Sec Siobhan Donoher.

Heywood Community School will host Ann-Marie McSorley this comming Thursday March 14 at 8pm. There will be a presentation on internet safety and cyber bulling followed by a Q&A session. All are very welcome Admin €2.