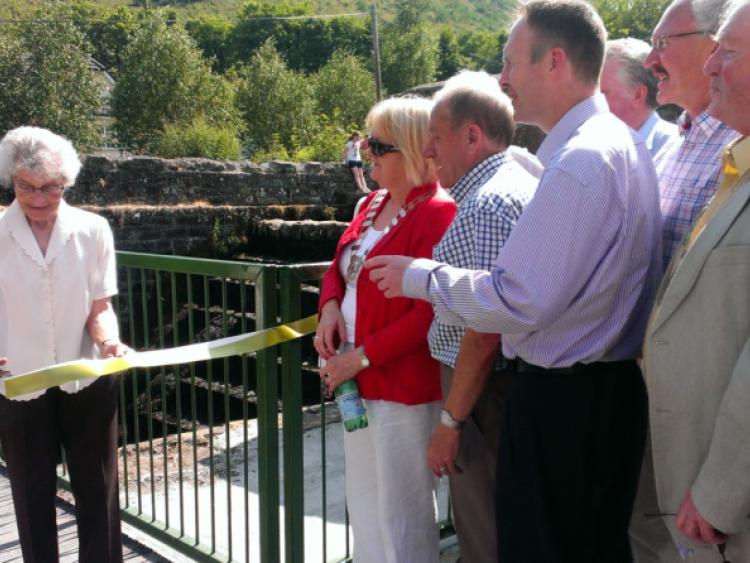 There was a celebratory mood in Killeshin recently, as the communitymarked the opening of the Killeshin Waterworks Amenity Park in glorious summer sunshine.

There was a celebratory mood in Killeshin recently, as the communitymarked the opening of the Killeshin Waterworks Amenity Park in glorious summer sunshine.

Chairperson of the local development association, John McDermott said he could talk forever about the waterworks, as he had been dreaming about it for 20 years.

“We are a can do community, it is up to us now as a community to look after this,” he said.

He complimented the area engineer, Orla Barrett for all her work on the project.

“Today would not have happened without Orla. This project has been growing for 20 years and the community have looked after it since it stopped producing water. We had no doubts that something would happen if we looked after it.”

The official opening was performed by Elizabeth Kinsella, whose husband John was the last resident caretaker of the waterworks.

“The Community Development will continue their caretaking role on this site in the knowledge that the council have their back and will be the wings to help and support the continued success of the amenity site,” Laois Cathaoirleach Mary Sweeney said.

The Eastern Area Road Crew carried out all the maintenance work on the site including clearing out and constructing the path, installing the three bridges which were supplied by local contractor Derek Donohoe, new fencing and cleared the top soil for a new car park.

Design by Nature sowed a wild flower meadow, which should be in full bloom by next summer.

Leas-Cathaoirleach of Carlow Town Council said Laois had got a bargain as the original cost was £13,500 but Laois had now got it for €1.

County Manager, Peter Carey said great credit was due to the Development association for their great persevernce over a long period of time.

“The exciting thing about this project is that it is for the community and they are to take ownership of it and make it their own,” he said.