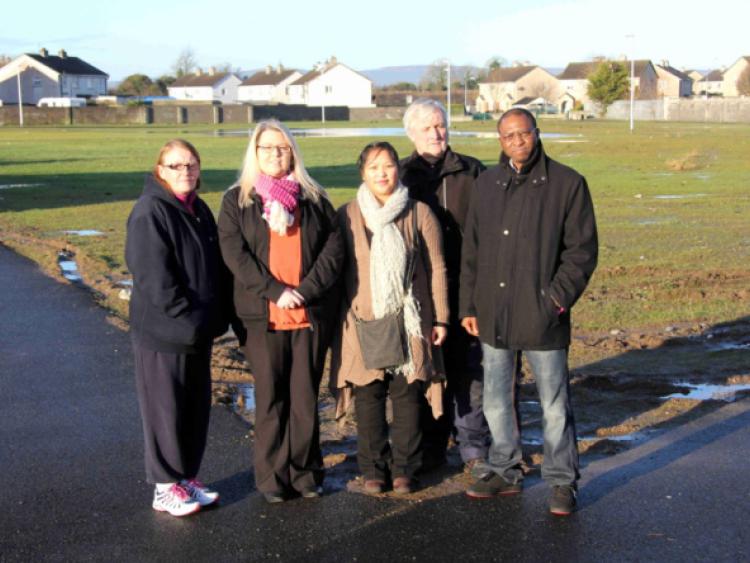 Waste ground that was a hive of anti-social activity in a Portlaoise estate is being redeveloped as a public park, and is already a hit with locals.

Waste ground that was a hive of anti-social activity in a Portlaoise estate is being redeveloped as a public park, and is already a hit with locals.

‘The Field’ as locals call it, is behind the Treo Nua community centre in Knockmay estate. Over time it had become a zone for anti social activities, dumping and drug users.

“From day one there were problems here because of the level of unemployment. We couldn’t change that but we can educate the children, and by doing that, parents come on board,” he said.

He said years of lobbying by the hard working committee, along with the success of Treo Nua family resource centre, finally convinced Laois County Council to build the park.

It has a tarmac walking track, and soon a soccer pitch, and playground, with landscaping, lights and CCTV.

Recent flooding will be fixed with drainage work.

Already the track is used by Portlaoise Athletic club.

“We had been looking for this for the past five years but got nowhere. The kids had no place to play. This is going to make a big difference. We will get street leagues going now to be ready for summer,” said Mr Delaney, a resident since the estate of 300 houses was built 35 years ago.

Each part will chose and plant two trees, and the playground will be supervised by committee volunteers.

“Treo Nua was never vandalised, and I hope this will be the same, that they see we are looking after their kids. They got a Christmas party this year, that never happened before,” Mr Delaney said.

County manager Peter Carey said it was a big success.

“A far greater number of walkers and runners are enjoying the facility that was originally imagined,” he said at the council’s annual budget meeting before Christmas.

Cllr Kathleen O’Brien, Portlaoise Tidy Towns secretary was delighted with the park, which should be fully completed by summer

“I want to compliment the manager on Knockmay park, people didn’t realise how badly it was needed,” she said.

€195,000 in council and sports grants has paid for the park, with local fundraisers to be planned for future costs.