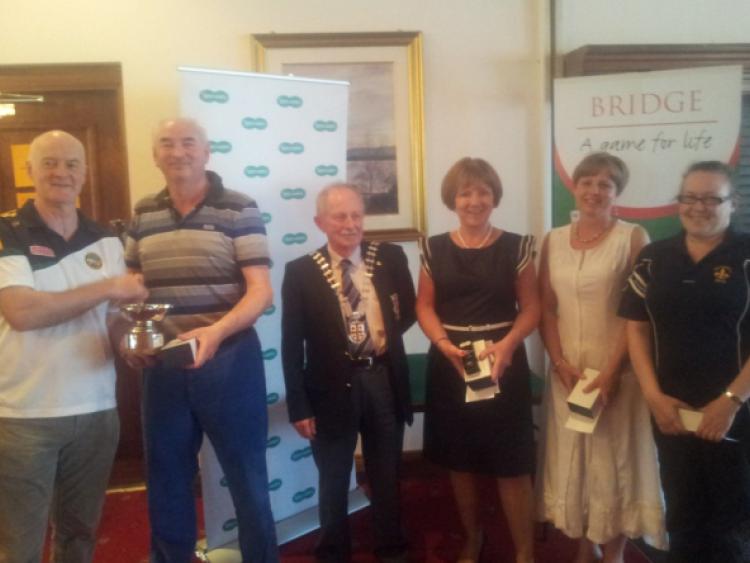 Portlaoise was well represented recently when the Laois Bridge team won the All Ireland Championships beating 68 teams from 32 counties.

Portlaoise was well represented recently when the Laois Bridge team won the All Ireland Championships beating 68 teams from 32 counties.

Going into the last match on Saturday June 8 against a strong Meath team they were in second place hot on the heels of a highly fancied and experienced South County Dublin team, when some very smart and brave bidding, allied to good card play and nerves of Steel earned them a deserved large win over Meath, that saw them overhaul South Dublin.

In twelfth place at half way they defeated six counties in a row by large margins to achieve victory. This is a huge achievement and the players are to be congratulated one and all. The team consists of: Damien Nee , Heather Ridgeway ,Margaret Nee and Suzanne Downes.

Over 32,000 play and enjoy Bridge in Ireland. Laois has some excellent welcoming Registered clubs,typically it costs €5 for an evening of great pleasure and an annual membership of about €30.

A game, suitable for all ages, if you can count to twelve, have a sense of humour, a little common sense and enjoy interesting people - its for you. Virtually no one who learns ever gives it up.

Bridge like Chess is a game of skill,logic and judgement, but with a sense of fun, psychology and an interaction with other like minded People of every age and from every walk of life united in their enjoyment of bridge.

The Contract Bridge Association of Ireland facilitates and organises enjoyable events throughout the year. Check out the website www.cbai.ie for a list of clubs and teachers.