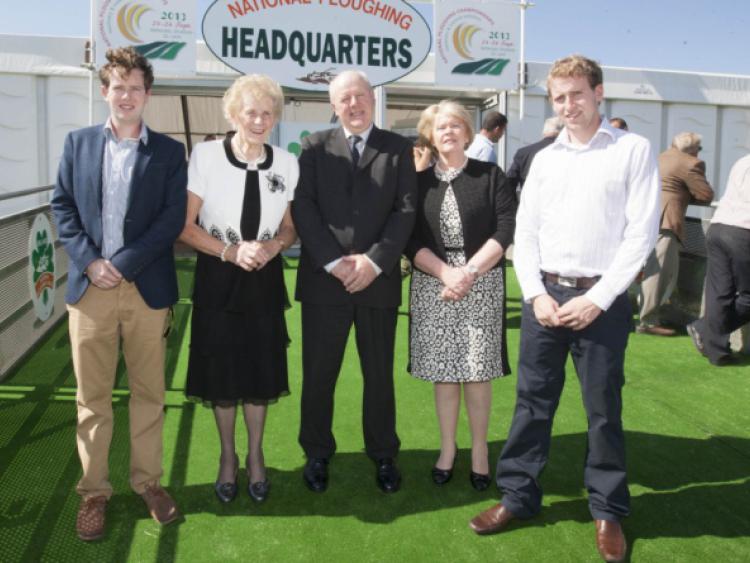 The Carter family from Ratheniska are one of five families whose lands will be used during the ploughing championships.

The Carter family from Ratheniska are one of five families whose lands will be used during the ploughing championships.

With fresh land needed everyday for the ploughing matches, as well as acres of space needed for the commercial stands and car parks, this year’s event is really a community effort.

But it is a huge undertaking to host the event, with your land being unavailable for most of the 12 months preceeding the championships.

“The hardest part has definitely been not farming as much this year. You definitely miss the buzz of the harvest,” Clive, son of David and Shirley said.

“We will just have the commercial side of things on our land mainly, but nearly everyone between different things like providing accommodation or the local clubs stewarding the parking.

“All the other adjoining farms have given their land,” he said.

Shirley adds: “It’s a real community effort this year. It’s bringing great life to the locality. Businesses in Stradbally are benefitting from it too, even down to the local charity shops. It has a knock on effect for all businesses in the area.”

“We were notified last year by local members of Laois ploughing. People from the National Ploughing Association came and looked around then, to see if the area was suitable,” Clive explains.

“They spent a long time looking at the road network.”

Clive continues: “It is something you really have to think about. We gave them the land in October of last year and they put it into grass for the event.”

While the family have no direct involvement in the organising, they are consulted at every stage.

“I studied construction, so I’m interested in how they’re are setting it up. I am out on site everyday, that side of things really appeals to me,” Clive said.

While Mum Shirley is very complimentary of the NPA.

“The NPA are extremely organised and so helpful. If we have any questions or there is any problems we can just pick up the phone and it’s sorted out straight away. From that point of view, it’s been very easy,” she said.

Work began in earnest on the site following the Bank Holiday Weekend, but took a break for the weekend of Electric Picnic, as the two sites border each other.

“They laid the tracks first and then the pipes went in for water and electricity.”

The good weather has also benefitted the set up.

“I think the main thing is to get the tracks laid on dry ground and people stick to the tracks during the set up, it will be ok” Clive explains, “hopefully the weather will stay fine for the whole event now.”

The family are very much looking forward to the events, and will have plenty of visitors to their own house that week to keep them busy.

Clive says: “We’ve had a lot of calls about tickets alright. But we have no say in that.”

Shirley continues: “The house will be very busy that week, everyone wants to come. We’re really looking forward to it.

“It will be a great showcase for Laois and what the county has to offer.”

While it has been tough at time for David and Clive with less farming to do this year than another years, they are still looking forward to the event.

“Hopefully the best part of this will be the event itself. We are looking forward to meeting people over the three days. It’s something that we would have always attended regularly ourselves, so it’s great this year that it is literally on our front door step.”