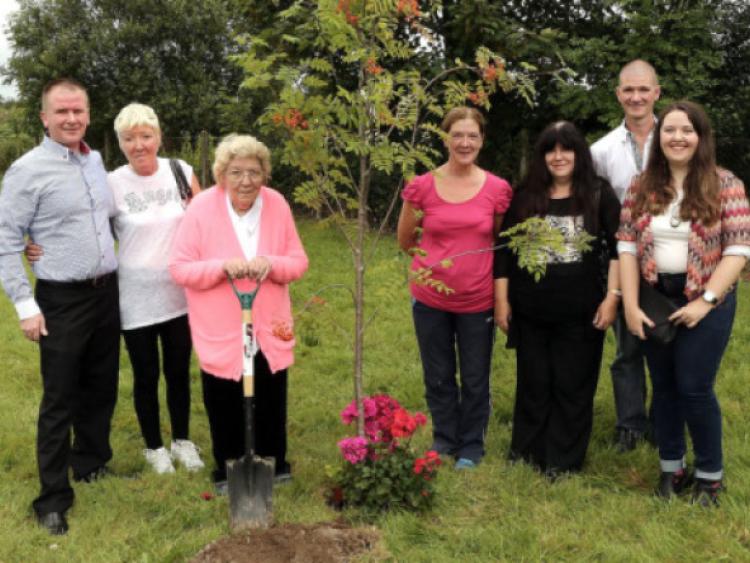 Family and friends gathered at Blackhall Bridge in Portarlington last weekend to plant a berry tree in aid of the late Tommy Hoey, who was very well known for his work in the town.

Family and friends gathered at Blackhall Bridge in Portarlington last weekend to plant a berry tree in aid of the late Tommy Hoey, who was very well known for his work in the town.

Originally from Rhode, Tommy moved to Portarlington where he and his wife Rose raised a family of six girls and three boys. Tommy worked on the bog near Portarlington for many years and as well as this, was involved with a number of committees in the town.

Members from most of the committees were there last Saturday for the planting of the tree, including the French Festival, The Tidy Towns, the Christmas tree committee, and FAS.

As well as these, Cllr Aidan Mullins from Portarlington, Cllr Martin O’ Reilly from Daingean, and Cllr John Foley from Edenderry also attended.

“We escaped the rain, and everything went brilliantly on the day. We had a good few of the family there, and my mother Rose held the spade for the tree to be planted.”

Afterwards the group went back to the Hoey house where they enjoyed tea and a chat.

“Everyone was telling stories about him. He was a great man for yarns. He passed away about two and a half years ago, and we got the idea to plant a tree, because he had planted a tree for someone near the train station.”

John told the Leinster Express that his mother Rose was delighted to have something in aid of her late husband Tommy.

“She is over the moon. Any time she is going into town she will see the tree. It’s near our house and we will keep it tidy. We are going to put a bench around it when it grows, and we will be adding a plaque in the next week or two.”