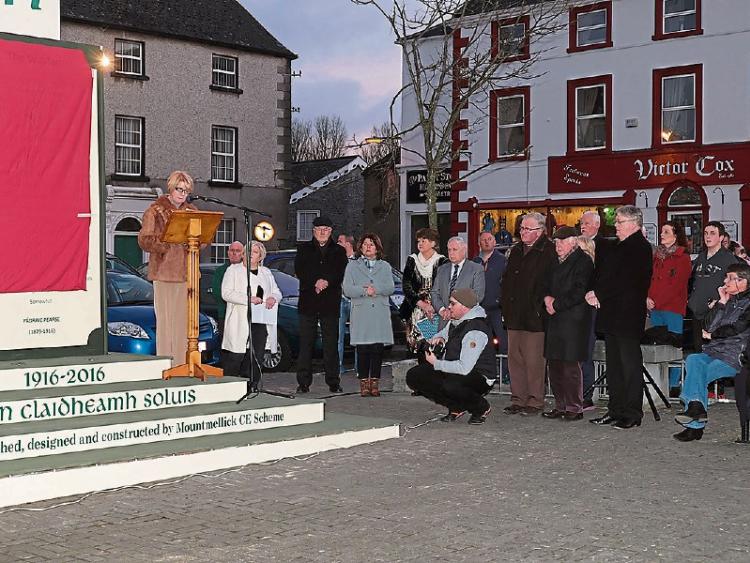 1916 commemorative project titled 'The Poet’s Rebellion' on Wednesday evening, March 16 in O’Connell Square to the music of the Mountmellick Pipe Band.

The project is part of Laois 1916 centenary celebrations and was part-funded by Laois County Council through Ireland 2016 funding.

It is a tribute to the poets and writers who inspired, fought in or recorded The 1916 Rising and takes the form of a temporary monument built around the permanent pole of the Mountmellick Christmas Tree.

Its purpose is to remember and to reflect on the contribution literary men and poets had on the 1916 Rising – who inspired both in words and deeds.

The CE Scheme Supervisor, Sharon Deering talked about the monument being the product of a lot of thoughtful consideration, hard work and skill on behalf of many individuals on the Community Employment Scheme and how proud she was of what they had achieved.

The event afforded an opportunity to remember through prayer, the loss of lives that occurred as a result of the fighting, on both sides, including combatants and innocent civilians - eloquently delivered by Fr. Dunphy (RC) and Mr. Roy Meredith (COI).

The Chairperson of the CE Scheme, Mr. John Moloney, reiterated the contribution that DSP funded CE Schemes make to local communities, made possible by voluntary committees who sponsor them, committing time and energy to projects such as this.

The Cathaoirleach, Catherine Fitzgerald spoke on behalf of Laois County Council who part-funded the project through Ireland 2016 funding.

Ger Lynch, one of the Sponsors and Directors of the CE Scheme, and who was a driving force behind the project, spoke about the contribution of the CE Scheme over many years to commemorating historical events in the town such as the Great Famine Walk, the bi-centennary celebrations of the 1798 rebellion, the WW1 Research and Remembrance Committee and now the Poet’s Rebellion.

He individually thanked the many people who contributed to getting the project from conception to reality. He also explained the meaning behind the structure.

The Rebellion of 1916, from a military point of view was never going to be a success.

Even if there was no countermanding order and if the arms which Roger Casement was bringing in from Germany had been landed successfully at Banna Strand, it still would not have secured victory but was certain instead to involve a greater bloodbath. 1916 was all about inspiration.

The temporary monument features some of their writings.

An Claidheamh Soluis was a Gaelic League newspaper which was edited by Padraig Pearse.

An Claidheamh Soluis translates as Sword of Light and in its time, this newspaper was the primary means of communication for the Irish language.

It in itself inspired a generation of Gaelic writers.

By applying a bit of imagination, particularly when the structure is illuminated, it is hoped that the structure will resemble in some way an Claidheamh Soluis, Sword of Light and will raise awareness of the literary and poetic aspects of the Rebellion and will act as a fitting tribute to the people who inspired and fought in the Rebellion.

Their sacrifices and that of others in the War of Independence eventually achieved our freedom.

It is hoped once again, if proof were necessary that the pen is mightier than the sword.

The other Mountmellick events part-funded by Laois County Council through Ireland 2016 funding and commemorating the 1916 Rising were also highlighted.

The monument was unveiled and illuminated by Laois native, award-winning poet and author, former writer in residence with Laois County Council, Ann Egan who provided insight into the historical, cultural and literary context at this time and read Padraig Pearse “The Wayfarer” featured on the monument as well as one of her own poems titled “The Streets of Mountmellick”.

The evening was concluded by Ann Egan illuminating and unveiling the structure which will remain in place until September..