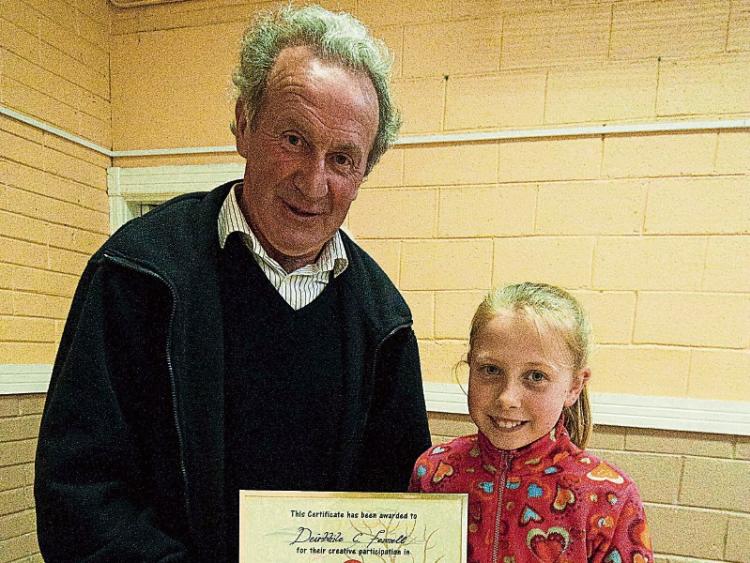 A large group gathered in Rosenallis on Sunday the 1st May for Bealtaine 'May Bush' Festival.

The festival, hosted by the Slieve Bloom Association, celebrates and revives an ancient Irish custom; the May Bush. Traditionally the May Bush was erected and decorated with colourful material, ribbons, flowers and garlands made from painted egg shells.

This is the 3rd year of its revival and the Association invited individuals and schools to create garlands for the occasion. At 2:30pm, those in attendance decorated the May Bush, including a garland that was specially prepared by pupils of Rosenallis National School.

Slieve Bloom Association Chairperson Carol Nolan TD addressed the gathering, welcoming those in attendance and thanking all members who helped prepare for the festival. On a warm yet slightly overcast afternoon she called on Mick Dowling, Slieve Bloom enthusiast and President of the Association, to speak about the May Bush tradition.

“Bealtaine is the first of the Celtic festivals coming into warmer weather. It would be held on the lower down peaks or level ground around the whole of the Slieve Blooms.” Mick explained that people would turn up with strings of material, ribbons, caps, decorated egg shells and necklaces of flowers, daisies, bluebells and cowslips to put on the May Bush.

Mick spoke about how the egg shells were decorated, “A twig from the tree would have been burnt and used to mark the egg shells, marking a cross on the larger part of the egg.” an example of Pagan and Christianity cross-over. He continued, “If any mistakes were made, the cloth from Imbolg festival was used to correct it, as it was said to be very powerful.”

People would have danced around the May Bush and Mick demonstrated one such dance. He invited everyone to link in a circle around the May Bush. As passers-by watched on bemused, young and old followed Mick's choreography with enthusiasm, (and a few giggles for some of the wiggles!)

Having appeased the Sun God the rain held off for the afternoon and the group retired to the Community Centre for refreshments and music. Deirbhile C Fennell was awarded a certificate for her creative participation in Bealtaine 'May Bush' Festival with a further one awarded to Rosenallis National School.

The Slieve Bloom Association would like to thank all those who attended and created decorations, Rosenallis Community Centre and Rosenallis National School. Thanks also to Association members who erected the May Bush, stewarded the event, provided face-painting and entertainment, prepared and served refreshments.

The next Slieve Bloom Association meeting will take place in The Green School, Rosenallis on Thursday 26th May at 8:30pm. For more information or to become a member contact Carole on 087 1350555 or email info@slievebloomassociation.com