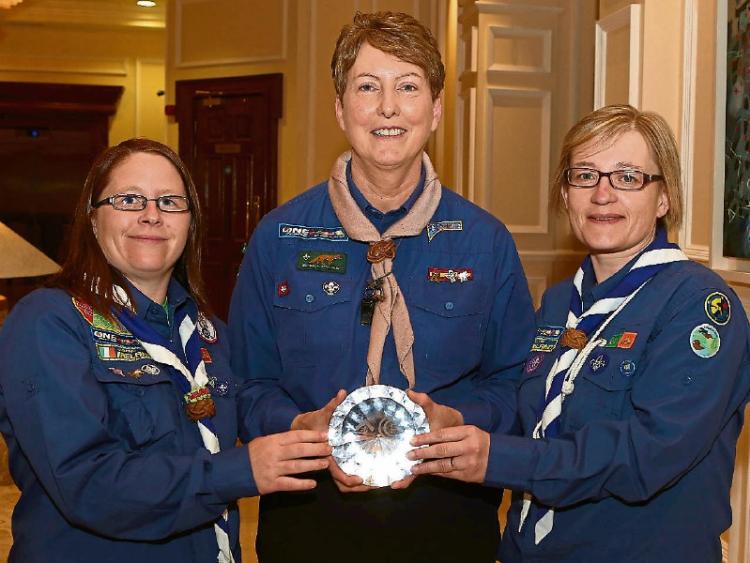 The heroes of local communities across the County were celebrated by Laois County Council in association with Laois Public Participation Network on Wednesday, May 11 when over 230 people gathered in the The Heritage Hotel in Killenard for the 7th Annual Community and Voluntary Awards.

The Awards are hosted to recognise the tremendous contribution made by community and voluntary groups to life in County Laois.

All nominees were recognised as having made a significant difference within and beyond their local community, through giving of their time, co-operation, their imagination and their hard work to achieve rewards for their clubs, events and fundraising within the community. Each group and individual was congratulated on the night and presented with a certificate acknowledging their contribution to the community and voluntary effort in Laois.

The Master of Ceremonies on the night was RTE’s Justin Treacy. The evening opened with a performance by Music Generation Laois Grupa Cheoil followed by addresses by the Cathaoirleach of Laois County Council, Cllr Catherine Fitzgerald, Minister for Foreign Affairs and Trade, Deputy Charles Flanagan and the Chief Executive, Laois County Council, Mr. John Mulholland.

The judges were thanked for their input having been impressed again this year and inspired by the ongoing commitment of so many people who achieve so much with so little. All the communities represented were sincerely thanked and were reminded that every community nominated is already a winner.

An Cathaoirleach, Cllr. Catherine Fitzgerald praised the contribution made.

“We honour people like you in communities all over our county, and all that you have achieved. Without the work of our volunteers, life in our county wouldn’t exist to the same standard that it does.

“Your positive attitude and creative skills make good things happen, and while we all know that we need money to exist, it’s the enrichment of people and communities that is so much more important,” she said.

“The giving of people’s time and effort voluntarily isn’t always easy. Nowadays, time is a precious commodity which we all seem to have less of, but volunteers make time – time to give to others in such a diverse range of areas, be it fundraising, helping neighbours, or organising local events that encourage visitors or just for the pure enjoyment of the community. All of these efforts and their successes are down to you and your colleagues. I commend and congratulate you for that,” he said.

Of the 15 nominations for Unsung Hero, Maura Reddin, a native of Mountmellick, was honoured on the night by Laois County Council as Unsung Hero 2016 and was presented with her award by An Cathaoirleach, Cllr. Catherine Fitzgerald.

Cllr Fitzgerald congratulated all the nominees, who are, as she put it, heroes in their own community, for the hard work and commitment they put into their local areas and people.