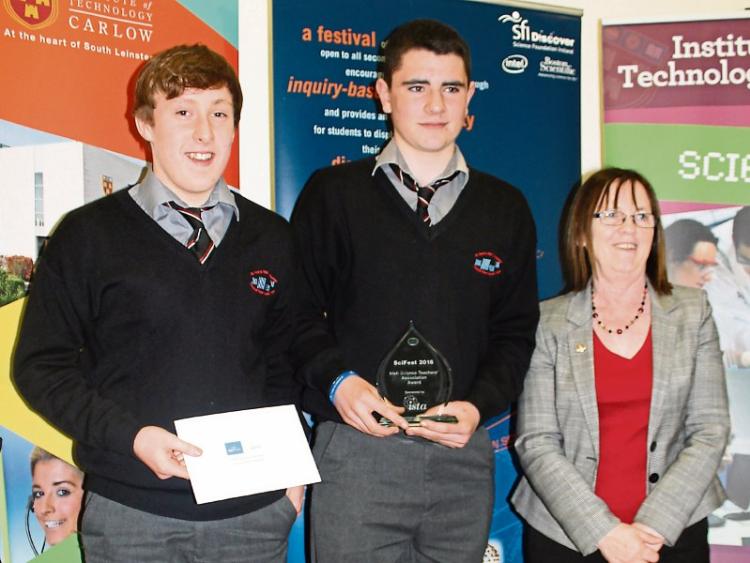 CBS boys were awarded three out of the top nine prizes at the regional SciFest in Carlow IT on April 28.

The Maths in Science award went to Luan Fletcher, CBS for his project ‘First Past the Post’.

Ms Felle said the awards were well deserved as the students had been working hard on them since January, and spoke well to all the judges.

“Last year we had only one winner so we are very proud to have three,” she said, thanking Carlow IT for the day which featured 64 projects from 12 schools. 17 students from St Mary’s showed nine projects.

A team of three from Heywood CS took a Highly Commended prize.

Students Marie Keogh, Grace Hanneffy and Roisin McEvoy were awarded SFI Discover Best Project Award at the WIT SciFest for their project, ‘EcoDishes', an alternative dishwasher tablet that would be much more environmentally friendly.

The duo now go on to the National final in November.

More than 250 students had presented their projects to 40 judges in Waterford.

TY students Emily Daly, Néamh O' Connor and Ciara Phelan won the BioParmaChem Ireland Chemistry Award with their project ‘To Vape or Not to Vape’, led by teacher Breege Masterson.

Their teacher Aisling Crowe said it was a great day.

“It was great for the girls to see how they measured up to other projects, giving them a chance to be creative and to see how they can strengthen projects for TY,” she said.

One winner from each of the 16 regional SciFest@college fairs was picked for the National Final in November.

SciFest was founded in 2008 by Dublin teacher Sheila Porter, to give all Irish secondary students a chance to exhibit projects on science, technology, engineering and maths, at science fairs.