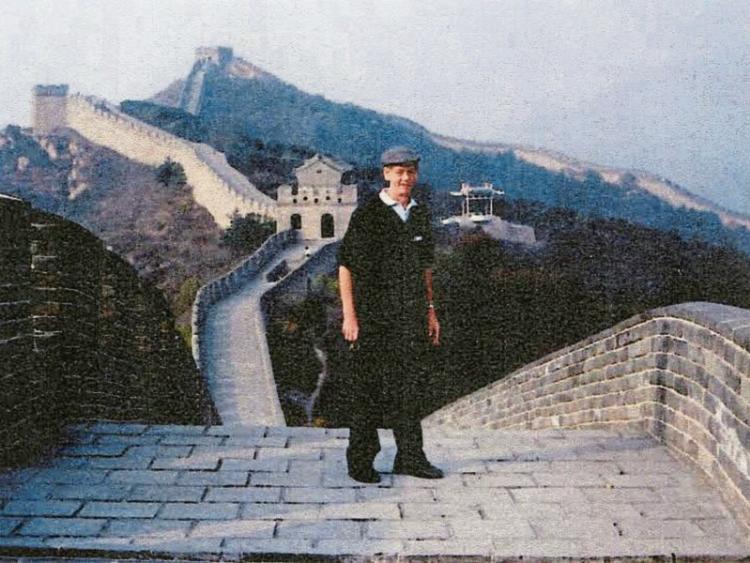 The death of Brother Mark (Paddy) Blake of the De La Salle Community in Castletown, Co. Laois, whose first anniversary was on 5 August, occasioned great sadness in the Midlands.

Paddy was born in 1931, the tenth of 12 children born to Thomas and Mary Blake of Glenkeen, Clonaslee. After Thomas died in 1942, Paddy used to help his brother Mick (the eldest) to bring cattle, via the Gurteen Bridge, for sale in Tullamore. Every two weeks, their mother would go in the pony and trap to sell country butter and eggs, with much of the money earned put by for education

At the age of 14, Paddy entered the Junior Novitiate in Castletown (where his brother Tom already was). He later volunteered for the missions. He took the Oxford School Certificate Examination in Kintbury, England, gaining entry to St. Mary’s Teacher Training College in Strawberry Hill, Twickenham, from which he graduated in 1952.

Paddy was 21 years old when he and three others set sail on the S.S. Corfu, destination Singapore. Next came a train journey north to Penang, through miles of rubber and coconut plantations, tin mines and jungle-clad foothills. The Superior in Penang happened to be Paddy’s relative, Bro. Fintan Blake from Clareen, Co Offaly, who assigned him to St Michael’s, Ipoh, in what was then Malaya. The boys in Paddy’s first classes were mostly ethnic Chinese, who were eager to learn and get on.

In 1960, Paddy was sent to St. Joseph’s School in Kuching (Sarawak), where his gangly six foot four figure on his trusty Honda 90 became a familiar sight. The Principal was Bro. Columba (Jimmy) Gleeson of Moneygall (now sadly also deceased) whose wonderful tribute on the day of Paddy’s funeral recalled those times. Bro. Gleeson judged Paddy a dedicated teacher with remarkable ability for encouraging weaker students. He taught English Language and Bible Knowledge to students from different racial and religious backgrounds, including a sizeable Muslim population. He had no time for bigotry, was not afraid to stand up to injustice, and fostered a tension-free teaching environment. He was a brilliant coach of rugby and athletics, and was largely credited with the school being Inter-School Athletics Champions for 17 consecutive years.

After Vatican Two, and when airfares home became affordable, Paddy would return each summer to Glenkeen, where his brother Jack kept ‘open house’ for his siblings in the religious life (Paddy, Tom, Tess, Win and Rose), as well as Bridie (Mrs. Connor), Mick, Marin, Peter and their families. Paddy enjoyed helping to draw in the hay, hiking the Slieve Blooms and following the local GAA matches, to which he often went with Noel Foynes and Joe Young.

In 1983 Paddy transferred to La Salle College, Kowloon, Hong Kong, where Bro. Raphael Egan was Principal. Kowloon was the location of the main airport then, so Paddy would have to pause lessons when the noise of a departing jet whooshed in through the open windows. Paddy retired from teaching at age of 65 but stayed involved with the school’s athletics endeavours, and still liked to climb ‘the Lion Rock’ (a nearby mountain). Paddy’s sincere prayer life was never showy, but in his quiet way he was at the heart of things. In 2008 he left Asia for the last time and retired to Castletown, where Bro. David Riordan and the community made him feel at home. He enjoyed the daily crossword, a smoke and a ‘nightcap’, as well as his cheerful banter with visitors and the excellent nurses of Miguel House.

In the last few weeks of his life, as news spread of Paddy’s failing health, Bro. Gleeson received e-mails from numerous Muslim and Christian ex-pupils who promised their prayers. Paddy retained consciousness until, with Fr. Thomas O’Reilly (P.P. Clonaslee) and his niece Mary in attendance, he passed away on an August Wednesday morning. A large turn-out of relatives, friends and neighbours accompanied Paddy’s De La Salle confreres for the funeral in Castletown. At the same moment, a Requiem Mass in St. Joseph’s Cathedral in Kuching was being said by Paddy’s former student, Bishop Simon Poh.