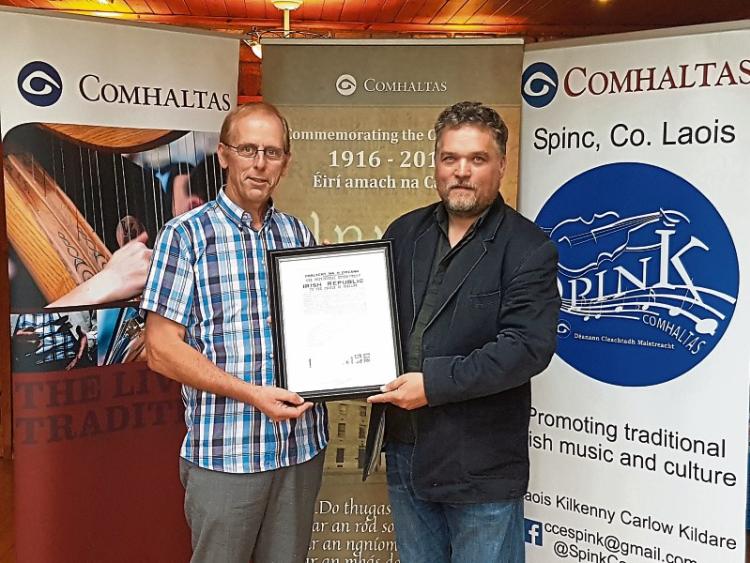 During 1916 many Laois groups and organisations have commerated the Easter Rising and Spink Comhaltas was among those by acknowledging seven outstanding individuals and community groups as part of the Commemorations.

Earlier this year, at the launch of ‘Macalla 1916’ An Echo of the Past – A Vision For the Future', the Comhaltas 1916 Centenary Programme, Labhrás Ó Murchú, Ardstiúrthóir CCÉ placed Comhaltas’ contribution to Ireland 1916 in its appropriate cultural context stating:

‘Our cultural identity was central to the aspirations and motivation of the 1916 Easter Rising. This was evident in the poetry, songs and writings of the leadership and others. This is encapsulated in the slogan ‘Éire ní hamháin saor ach Gaelach chomh maith’. This cultural emphasis is reflected in the ethos of Comhaltas and will define our extensive centenary programme at home and worldwide’.

As part of 1916 commemorative events, Spink branch of Comhaltas presented a specially framed copy of the 1916 Proclamation to 7 individuals and community groups whom the branch believes have an outstanding contribution to Irish culture and the local community. These presentations were made as part of the summer seisiún series in Heritage House, Abbeyleix, during August.

Abbeyleix Community Nursing Hospital provide a comprehensive service for persons over the age of 65, and is underpinned by the principles of person centred care as well as dignity and respect for all. As a symbol of Spink Comhaltas' appreciation for their work, and as a message of solidarity with the hospital in the face of on-going uncertainty regarding its future, CCÉ Spink presented Catherine Phelan on behalf of the hospital with a commemorative copy of the 1916 proclamation.

St Vincent de Paul’s main area of work is person to person contact with people who need help and assistance, providing practical and financial assistance towards day to day essentials in a respectful, confidential and non-judgmental manner. The St Vincent de Paul team in this area cover Abbeyleix, Ballyroan, Ballinakill, Raheen, Shanahoe, Spink and The Swan.

Comhaltas promotes and preserves traditional Irish music. Alice dedicated much of her time to doing this by maintaining the music classes in Spink. A former Chairperson of CCÉ Spink, Alice played a central role by assisting all branch officers and the teacher.

Her love for the music was her constant motivation and we acknowledge her efforts in providing the strong foundation for the branch we have today.

In addition to leading the branch, Alice is a former All Ireland champion on tin whistle, and her skills as a music teacher were important a number of years ago to teach young musicians while the usual teacher was on maternity leave.

Active Retirement Ireland supports over 24,000 older people to live active and healthy lives in their communities, focusing on improving the quality of life of everyone as we age, and helping to create an Ireland which is good to grow older in. In the Abbeyleix area, there is a particularly strong group.

We hear regularly about how rural Ireland is neglected, but we do not hear often enough about the great local initiatives which take place in rural Ireland. Spink Community Development Association is an example of just such a group, with a strong emphasis on developing and supporting its local community.

Spink Comhaltas has for over 20 years been based out of the Community Hall in Spink, and it is a central part of our past, present and future.

Any teacher has the potential to leave a lasting impression on their students, and in CCÉ Spink we are fortunate to have an outstanding teacher in Paula Dowling – not just for her passion and interest for traditional Irish music, but for her personal commitment to her students, to the groups that she coaches and prepares, and for her professionalism and personal investment she has put into Spink over many many years.

Most importantly, the tradition of playing and enjoying Irish music is being handed on to a new generation. Registration for the 2016/7 season is on Friday 16 September in Knock Hall, Spink or by email to ccespink@gmail.com More information is available on Spink Comhaltas on Facebook.