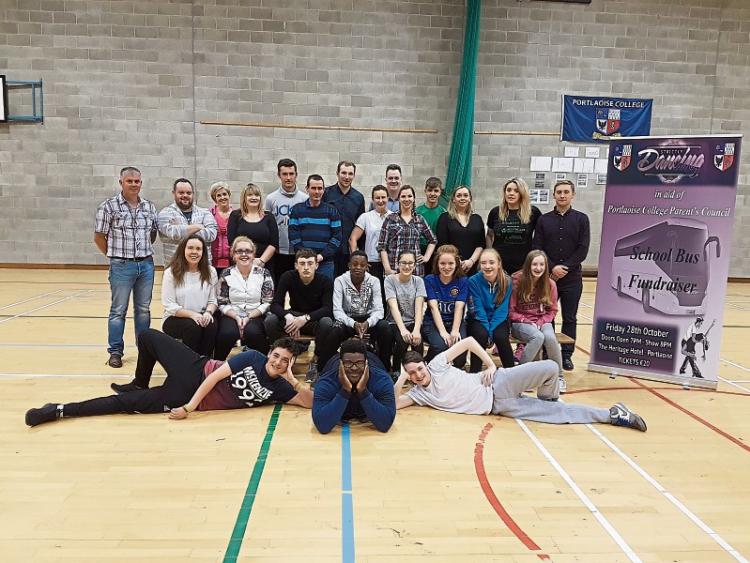 Students, staff and parents from Portlaoise College are putting on their dancing shoes and sequins to try to raise enough money to buy a full sized school bus.

The college is holding its first every Strictly Dancing, on Friday October 28, and tickets are already on sale for what promises to be a night of hidden talents and lots of laughs.

Fourteen couples have been working hard on their dance moves in rehearsals since school started back, helped by professional choreographers.

It is organised by the parents council, and Chairperson Louise Dent has been having a sneak peak at group rehearsals.

“It's brilliant, hilarious and exhausting,” she said.

“The dancers are putting in a massive amount of work. The time they have given up for this is amazing, we couldn't have asked for a better bunch,” she said.

The college already has a bus, but it only seats 14.

“The school ends up renting another bus to go to events,” she explained.

“We want to buy them a bus big enough to take a whole team or class. It will cost about €45,000 and we hope to achieve it this year. It is a massive undertaking, but if the schools owns the bus, we as parents can know it is safe and properly serviced,” she said.

The €20 tickets apply to both students and adults on the night, but it will be money well spent she said.

“Students will benefit financially over the years because it will save parents money on trips, it's kind of like buying their bus tickets,” Ms Dent said.

Principal Noel Daly has even been roped in to show his moves for one of the performances.

“It's a huge effort by the whole school, we are looking forward to a big night, it promises to be fantastic fun. We hope to upgrade the existing bus. It would make a big difference to be able to fit all 24 students from a class on one bus, and a big cost saving for parents,” he said.

The night takes place in the Portlaoise Heritage Hotel, with doors opening at 7pm, show starting at 8pm.

Local businesses can get on board the bus fund by taking out an advertisement in the programme.

A 'blind raffle' will be on sale all night.

“Instead of buying a ticket, people buy a sealed envelope, and then open it up to see if they have won a prize,” explained Ms Dent.

The night had its offical launch on Monday October 10, when a large crowd were treated to a taster of what is in store on October 28.

Tickets €20 available from the school.