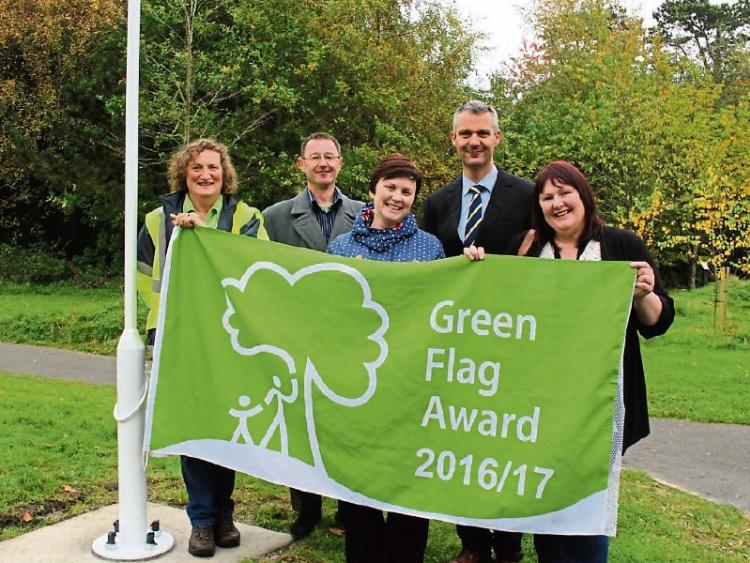 Not a sweet in sight. Nor fizzy drinks. Nor crisps. Plenty of fruit, though, and bottled water. And the kids tucked in, and adults too, enjoying the fare under russet-leaved trees.

The scene was the People’ Park (Pairc an Phobail) off Timahoe Road in Portlaoise last Wednesday. The occasion was the raising of a Green Flag by County Council Chairman Tom Mulhall.

The Green Flag is a status symbol, recognized internationally, and only 22 have been awarded to parks in Ireland. So Portlaoise has joined an elite.

The emphasis in Pairc and Phobail is on the environment. It’s an ecologically-sensitive area with woodland walks, fairy trails, tree trails, orienteering and even bird and bee boxes.

And there’s a pond, with ducks, and a playground, and a gym, and more, and delineating the site is the River Triogue, the Down’s Lane and Tyrell’s Wood.

Many of the features in the park were installed by the Council earlier this year. In addition, paths, extending for one kilometre, were resurfaced. They’re now buggy-friendly, as well and being ideal for pedestrians and joggers.

Cllr Joe Dunne, sadly since deceased, opened Pairc an Phobail in June 2000. Earlier, in 1993/94, a voluntary committee, Portlaoise Environmental Group, had campaigned for the provision of a town park in what was then Onions’ Field after developer Tony Graham had sought planning permission for the erection of houses there.

He eventually got that permission, but agreed to sell to the County Council a portion of the field for a town park. Hence Pairc an Phobail.

Chairman Mulhall told the gathering: “We are delighted that Pairc an Phobail has achieved this green flag status. Having a facility like this will contribute to promoting the health of the people of Portlaoise. The raising of the Green Flag today will demonstrate how committed Laois County Council is to restoring Pairc an Phobail as a focal point for the town and also an attractive destination for visitors to the town.”

Robert Moss, representing An Taisce said the awarding of a Green Flag was a major achievement by, and a credit to, the park staff and management. The aim of the scheme, he explained, was to encourage the provision of good quality parks and green spaces for the public in an environmentally-friendly way.

Sheila Duff, representing the Active Retirement Group, described Pairc an Phobail as a great amenity for young and old. Her grandchildren enjoyed it, she revealed. She added: “I hope it’s used extensively by everyone.”

MC at the event was Acting Senior Executive Engineer Wesley Wilkinson. Present, too, was Portlaoise Munipal District Chairman John Joe Fennelly and other public representatives. Kathleen O’Brien was there from the Tidy Towns Committee.

Among the attendance at the Green Flag raising ceremony in Pairc an Phobail, Portlaoise, on Wednesday was Cllr Jerry Lodge.

The park is located on what was once Onions’ field, bounded by the River Triogue. Across the river, on the New Road, was Jerry’s home.

As a young man he was a keen athlete and he kept fit by running in the field. Part of it was also used by boys from the New Road and elsewhere as a soccer pitch.

She’s a daughter of legendary Laois and O’Dempseys footballer Jack Kenna. Among his achievements were three Railway Cup medals.

Happily, he and his wife Mary (nee Connor from Cappagh), recently celebrated their 54th wedding anniversary.