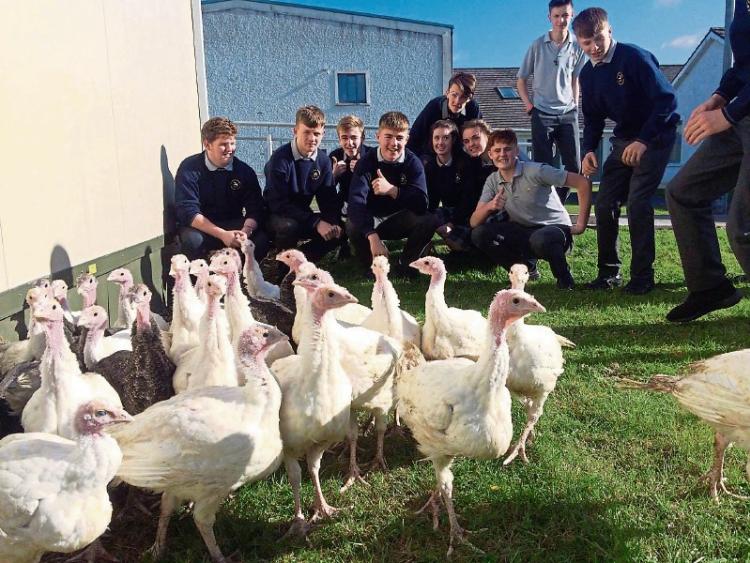 Students at Coláiste Iosagáin in Portarlington are taking a hands on approach to their mini companies, rearing turkeys and calves in the school.

The students are on a rota caring for 28 turkeys, which will be sold by live auction in a pop up mart in the canteen December, then killed by staff, and plucked by students and hung for a week in the science labs to have them oven ready for Christmas.

“This is real life and they love it. They actually see where our meat comes from, some of the students think it just appears in the packet. It good for them to see they can do this themselves,” he said.

Sarah Walsh is one of the students, who each invested €40, hoping for a profit.

“Our class built a turkey house with the help of Mr King and Mr O’Donnell. They are free range turkeys that we bring for walks every day, they get to roam around and pick grass in the field as turkeys should do,” she said.

Three students at a time are on a rota for feeding and cleaning, said Neema Henry.

“We work for one week including the weekend. It is hard work, but enjoyable. We feed, water and bed them, morning and evening. Twice a week we clean out their house and put in fresh straw daily. It’s a seven day a week job, 24 hours a day,” she said.

“We are all on different committees like accounts, publicity and purchasing,” Neema said, adding that the turkeys have “blended in”.

“Everyone is fascinated by them, almost 1000 students and 70 teachers walk by them every day,” she said.

They hope for local support at their live auction,

“We plan to give some of the money that we raise to a local charity. All students in the class have named a turkey and we are doing a profile on each turkey with its weight for auction day,” Sarah said.

Turkey Enda Kenny is the “clown of the bunch, always joking, ordering turkeys around and one of the most hated turkeys“ they said, while Ciaran Kilkenny is named after the Dublin All Ireland footballer .

“He is an animal, he loves running around, he’s on a strict vegan diet of barley and wheat, and shows great sportsmanship to his team of turkeys,” said Neema.

Students from An Cuan, the school's autistic unit, are also helping feed the turkeys.

The students will also head to a mart on November 7 to buy two heifers.

“We researched different breeds and prices on done deal and hope to buy locally. We will fence off paddocks in the back field, and maybe build a winter shelter, with a rota for their care. At the end of the year we will sell them to make a profit for our hard work,”said Sarah.