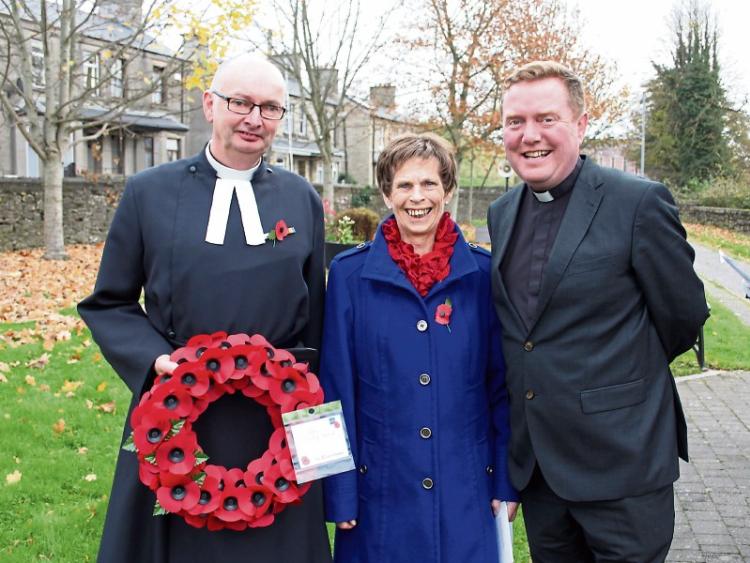 The dead of The First World War were remembered in Portlaoise last Sunday (November 13)—exactly 100 years after the final, and futile, engagement of The Battle of the Somme.

The well-attended annual Remembrance Day ceremony took place at the Memorial in Millview which honours 17 officers and 160 NCOs and men of the Leinster Regiment’s Fourth Battalion who perished in The Great War.

Local Rector Rev Brian Burke told the gathering that 28 of those named on the Memorial had died in 1916 and, he believed, 13 or 14 of them were killed on The Somme. Most of the graves of the 28 were in France or Belgium, he explained, but some were buried as far away as Jerusalem and Alexandria.

Before the War Memorial ceremony, a special service had taken place in St Peter’s Church, where uileann piper Joe Coady, from Athy, had played evocative music.

Rev Burke laid a wreath at the Memorial, as did organizing committee chairperson Kathleen O’Brien.

Among the gathering were three ex-soldiers who’d served in the Congo, Jimmy Hutchinson and Tommy Breen, both from Abbeyleix, and Joe McEvoy, Portlaoise.

They were among the contingent of Post 27 United Nations veterans under the command of Parade Marshall Jimmy Shiels.

Fr Paddy Byrne CC, along with Rev Burke and Michael Thompson of Post 27, led the recital of prayers.

Andrew O’Brien, deputising for Malcolm Smith, was in charge of amplification. Noel Ryan was on duty selling poppies, symbolizing the blood of millions shed in “The War to End All Wars.”

Tony Flanagan said his organization, Post 27, was greatly privileged to be involved in an event that honoured people who had given the ultimate sacrifice of their lives.

Rev Burke led the applause for Kathleen O’Brien who, he said, was the person who really deserved thanks for preparing the ceremony.

Delivering the oration, Ms O’Brien stated: “Europe was ravaged by World War I but, perhaps, it is only now with the distance of time that we are able to appreciate and understand the impact this human tragedy had on Ireland.

“For the returning Irish veterans it was difficult, in many cases impossible, to talk about their shocking experiences fighting in the British Army. People at home had their own problems—unemployment and poverty along with their own political beliefs.”

Ms O’Brien went on: “There was little appetite for returning soldiers who had worn British uniforms. The men and women who returned home faced great hostility in many instances, with little concern given for their terrible physical and mental injuries.

“Of course, they were the lucky ones to return home. For many families the arrival of the postman at their door meant a terse note informing them that their sons had been killed in action.”

She concluded: “But today we stand here at this well known local landmark and remember those noble men.”

A recording of The Last Post was played, and St Joseph’s Accordion Band rendered the National Anthem.