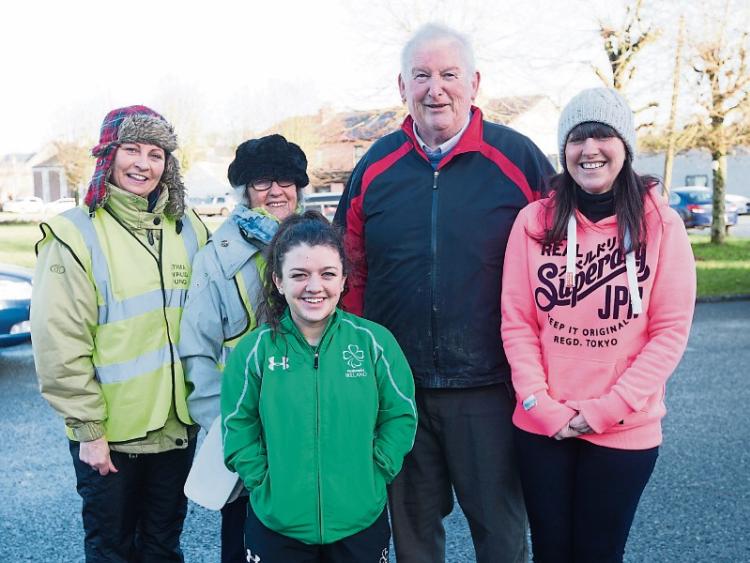 Only three days did she take off at Christmas from her gruelling schedule of rising at five o’clock in the morning to practice swimming at Portlaoise Leisure Centre.

So an honour indeed was it for Timahoe when Nicole Turner arrived on New Year’s Day to launch the 15th annual local charity walk, or walks, with proceeds going to the Irish Wheelchair Association and the Fatima Invalid Fund.

It was her first time in The Round Tower village.

Her mother Bernie travelled with her from their home in Garryhinch, near Portarlington.

“Nicole captivated our hearts with her performances at the Paralympics in Rio de Janeiro during the summer,” noted event organizer Johnny Dalton.

He added: “Of all the celebrities who launched our walks over the years, Nicole has received the most favourable reaction.

“We are delighted to see her here and we wish her well in Tokyo in four years’ time.”

Over 100 people were assembled on the village green for the start of the 6kms and 10kms walks and practically everybody wanted to have their photo taken with Nicole who, while self-effacing, exuded star quality.

Young Portlaoise man Noel O’Brien, who himself is no mean performer when he puts his mind to it, got into the picture, as did his father Noel Snr.

He was collecting funds as were John Egan, Jimmy Sheils, Maura O’Brien and Clodagh Cooney, aged 9.

There, too, was Johnny O’Brien who recently published his 11th book of picture on his beloved Portlaoise.

The sun shone on the walkers as they perambulated over Fossey Mountain, and spread below them were the plains of Laois.

Then it was back into Timahoe , into the Community Hall, for much-needed tea, soup and sandwiches served by the Dalton family.

“It was a great turnout,” Johnny enthused. “Everyone enjoyed it.”